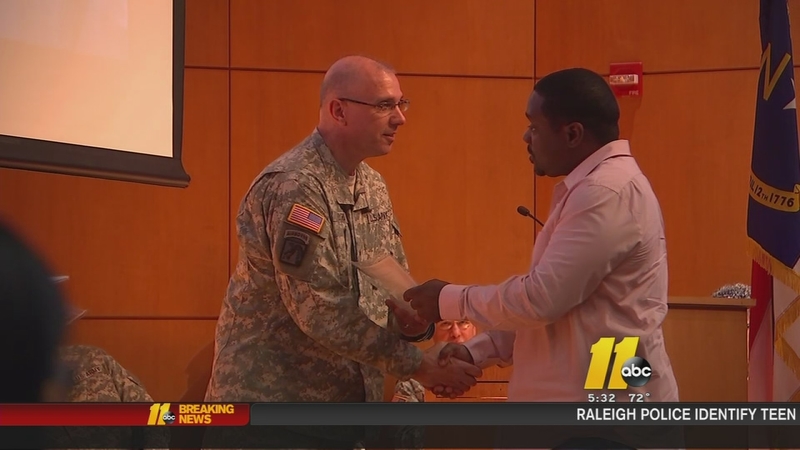 RALEIGH (WTVD) -- Genevieve Strydom said she waited twelve years to become a US citizen after her family came to the states from South Africa with only their suitcases in hand.

She's one of 61 people from 29 different nations who were granted citizenship Thursday. The naturalization ceremony was held at the North Carolina National Guard headquarters in Raleigh.

"America is great," Strydom said. "We're really happy and excited to be and we appreciate being here."

It was the first time the NC National Guard held the ceremony.

A military serviceman was also among those becoming citizens. Marine Corporal Simeon Kitt is a native of Guyana and was naturalized Thursday, leading others in the pledge of allegiance.

National Guard soldiers, like second lieutenant Jason Barber, looked on as the ceremony went on. Barber is a native of Australia who was naturalized in 2008.

He said he wanted to attend the ceremony to support the new citizens and said he felt compelled to serve after first coming to the US.

"I was in the Australian Army and always wanted to be a part of something bigger and help other people," Barber said. "And so moving over here I wanted to keep that same tradition alive. And the National Guard seemed to be good way to do that."

Sary Martinez, a native of Honduras and a policy analysis student at Elon University, said she's excited about becoming a citizen.

"My mother is here," Martinez said. "My entire family, basically, is here, so my American dream is to be happy with my family and to be able to provide for them."