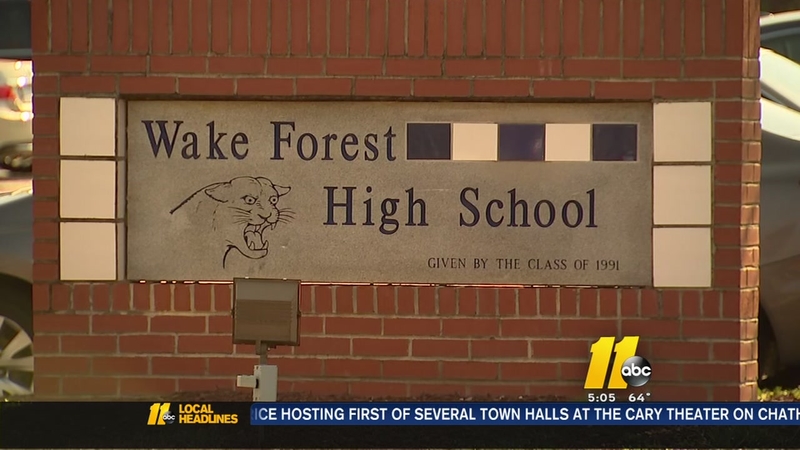 Student in videoed altercation says he couldn't take it anymore

The video posted on Instagram appears to show an altercation between two students at Wake Forest High School on Friday.

It shows a student being grabbed by his backpack and thrown backwards while walking down a crowded hallway.

However, the person who shared the video said the student who pulled the other to the floor - Micah Speed - was defending himself against racial harassment that school leaders haven't dealt with.

Speed was suspended 10 days due to the incident, but he told ABC11 Monday that school officials have now reduced it to 5 days.

He and his family spoke with ABC11 after their meeting with school leaders, because he said he wants everyone who saw the video to know he is not a violent person.

"I want to say I'm not a violent person. That's not who I am ... Everybody who's known me and that knows me currently knows that I try to avoid confrontation and I usually laugh things off, but I was just pushed over the breaking point," he said.

#Breaking-Micah Speed, seen in the viral video of confrontation at Wake Forest High, says suspension has been decreased to 5 days. #ABC11 pic.twitter.com/tfFNHB0Et0

Speed said he grabbed the other student's backpack and knocked him to the ground twice when he couldn't take it anymore.

"He said things like ... I need to name my son 'Convict' and 'Crackhead' ... because that's what they'll grow up to be," Speed said. "He threw the N-word around very loosely, said things that I looked like I bathed in coffee beans and dirt."

ABC11 has not been able to reach the other student in the video, but Speed said he had been racially harassed for the past two months. He also said that the student giving him a hard time went as far as threatening to kill his family.

The 15-year-old football player said he reported the racial harassment to a teacher three times.

On Monday, students protested after every period to show their support of Speed, and asked school leaders to bring him back.

Meanwhile, a change.org petition asking for the other student to be suspended has more than 1,300 signatures.

A spokesperson for the Wake a County Public School system says the school did look into Speed's reports, but couldn't say what, if anything, was done about it.

The school district would not say more about the incident, but did say it was investigating.