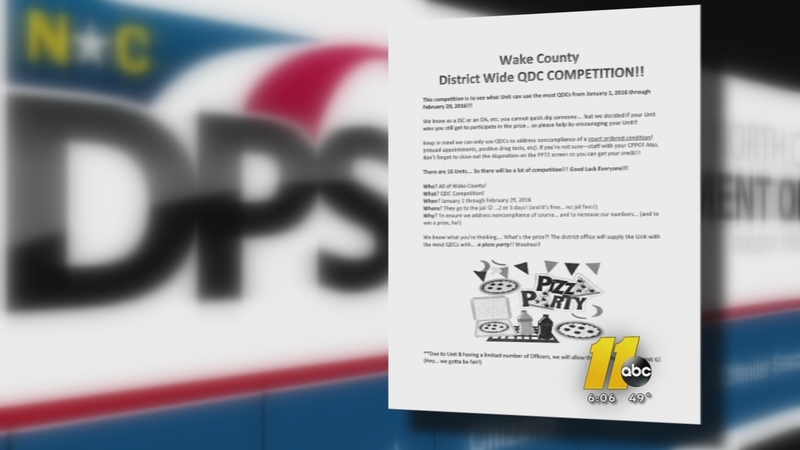 On the heels of an I-Team report last week, the head of law enforcement in North Carolina was sharply critical of a program incentivizing parole officers to put offender back in jail using what's referred to as "quick dip confinement."

"I did not believe that was appropriate at all," said Public Safety Secretary Frank Perry.

Perry was the first top official in the Department to learn of the program. An anonymous tipster sent him the same flyer that alerted the I-Team to it a week later. It offers a pizza party to the parole officers who made the most "quick dip" arrests in January and February.

Perry wrote a note in the corner and sent it off to a deputy that same day, Dec. 30. The note read: Do you think this is appropriate?

"I certainly meant by my notation that this has got to be stopped," Perry told the I-Team Friday.

Department officials say they shut the party down Jan. 7, after word filtered down from Perry's office. The next day, Jan. 8, Community Corrections Director Anne Precythe, told the I-Team it was the first time she'd heard of a quick dip competition.

But in the wake of ABC11's reports, another tipster sent the I-Team an email, allegedly sent from a probation manager in Morganton, NC, offering a different prize for the most quick dip arrests - a gift card.

RELATED: Read the emails about pizza party and other incentives here (PDF)

"This happens to be a program that isn't approved by anyone," Perry said. "It apparently was done on at least two local levels, I hope not more than two. And it's my understanding, it's my demand, that it be stopped."

But Perry also defended quick dips as a highly effective tool in reducing recidivism. "The theme of the program is quite good," he said. "It's a way of getting the attention of the person on parole so they don't come back into our facility."

And data provided by the state seems to bear that out. It shows that in 2014, quick dips had a higher rate of positive outcomes and a lower rate of parolees absconding, when compared to another non-quick dip group. Perry said, partly because of quick dips and other changes made in the last few years, North Carolina leads the nation in the highest rate in reduction of recidivism.

"You can do the right thing but do it in the wrong way," Perry said. "This is an example of that."

But not everyone is convinced.

"I don't doubt that quick dips are a valuable tool," said Sarah Preston, Director of the NC ACLU, "but I think if they're creating a process like this, you really need to be judicious about how you're going to use it. And basically encouraging its use, instead of evaluating how to prevent someone from reoffending and determining whether they need more service or other supports, is really contrary to what we all thought parole officers were supposed to do. Obviously, we need to protect the community, but they're also supposed to be helping to reintegrate offenders back into the community and help them not reoffend."

Precythe says she trusts her managers are giving the right directives to parole officers, but says the division will look into it and retrain managers if necessary.

"It strikes me that we need to do some more education with our manager if that's the message that is being sent in certain areas," Precythe said. "Then we'd need to talk with our managers and make sure that they understand the context in which quick dips are used."

Perry said he doesn't think more training is needed. "I don't know if training is needed. I think that an edict from the top that we're going to do things the right way and that this was a fumble that was rightly brought to our attention. You rightly investigated and we need that oversight."

Perry said he doesn't expect to punish anyone in the program who condoned incentives or Precythe as the program's top official. "She's an excellent director. Her heart and soul is in that program."