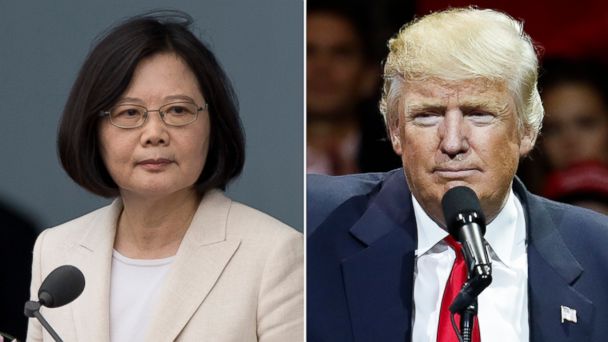 ABCNews
By MELINA DELKIC
China has lodged "solemn representations" with the United States over a phone conversation Friday between President-elect Donald Trump and the president of Taiwan, the Chinese foreign ministry said.

Chinese foreign ministry spokesman Geng Shuang told reporters in Beijing that China urged the relevant parties in the United States to handle Taiwan-related issues "cautiously and properly" to avoid "unnecessary interference" in the China-U.S. relationship. He did not describe details of China's complaint to the U.S., or say with whom it was lodged.

"There is only one China in the world, and Taiwan is an inseparable part of Chinese territory," Shuang said. "The government of the People's Republic of China is the sole legitimate government representing China. This is a fact that is generally recognized by the international community."

The president-elect's call with Taiwanese President Tsai Ing-wen broke with decades of delicate U.S. policy on China and Taiwan.

Taiwan has held that it is an independent nation since it split from the Chinese mainland in a 1949 civil war.

But the United States has maintained a "one China" policy since establishing diplomatic relations with Beijing in 1979, meaning that it has not recognized Taiwan as its own country and rather as a part of China. Since then, no phone calls between a U.S. president-elect and a Taiwanese leader have been publicly reported, according to Center for Strategic and International Studies China expert Bonnie Glaser.

The U.S. does have a "robust unofficial relationship" with Taiwan and commits to defending it in the event of a Chinese attack, according to the U.S. Department of State's website.

"During the conversation, President Tsai and President Trump also exchanged views and ideas on the future governance, especially the promotion of domestic economic development and the longterm strengthening of national defense, so as to enable the people to enjoy a secure and better life," the statement from Tsai's office read.

Meanwhile, Trump defended the move on Twitter on Friday night.

Earlier Saturday, Chinese Foreign Minister Wang Yi initially downplayed the telephone call, describing it as "just a small trick by Taiwan" that he believed would not change U.S. policy toward China, according to Hong Kong's Phoenix TV.

"The one-China policy is the cornerstone of the healthy development of China-U.S. relations, and we hope this political foundation will not be interfered with or damaged," Wang was quoted as saying.

A spokesperson for the White House National Security Council said there is "no change to our longstanding policy on cross-Strait issues. We remain firmly committed to our 'one China' policy based on the three Joint Communiques and the Taiwan Relations Act."

But the fact that the conversation took place at all is "highly unusual" and "significant," said Dr. Claude Rakisits, of Georgetown University's School of Foreign Service, an expert in U.S.-South Asian affairs.

"The fact that Trump actually spoke with Taiwan [president] would irritate the communist leaders in China, in Beijing, because they would wonder, 'Is this an indication of the sort of relationship that one could expect between the U.S. and China during his presidency?'" Rakisits told ABC News. "I can't remember the last time a president in the U.S. actually called the president of Taiwan."

A former Republican White House national security official said Trump's conversation with the Taiwanese leader "will upset an apple cart that has needed upsetting for a long time."

"I've lived with this policy area my entire adult life and I've lived with the arguments around this for more than 25 years," the former national security official told ABC News. "To me, I am thrilled that this call took place ... No one should be telling the U.S. president who he can and cannot talk to ... Especially if a very powerful competitor in the world is saying there's a risk of conflict over this territory, it's even more important for our leader to have communication with that leader."

In the past, Trump has voiced support for a weapons deal with Taiwan, advocating a tough stance against China.