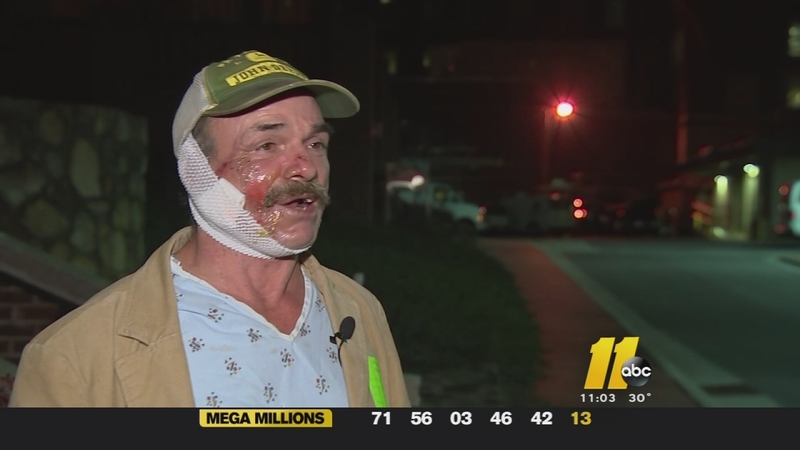 DURHAM (WTVD) -- Police in Durham are still investigating after a man was shot in the face with a flare gun earlier Tuesday at a shopping center in the 600 block of Witherspoon Boulevard off Hwy 15-501.

Detectives said two men got into an argument in the restroom of a Panera restaurant, and that's when the shooting happened.

Late Tuesday evening, ABC11 spoke to the victim, Kenneth Bartlett, who arrived at UNC's Burn Center in a lot of pain. He was attacked with a flare gun that was fired directly on his face. The man who pulled the trigger was no stranger, Bartlett said.

Bartlett is now the walking wounded. But it could have been worse. His morning routine at this Durham Panera bread was interrupted by a bizarre encounter with a flare-gun-wielding man inside the store's men's restroom.

"Next thing I know is this guy is just walked up behind me and puts the gun, the flare gun right into my cheek, and pulls the trigger," Bartlett said.

He described seeing smoke and the flame from the flare as it burned through his face. He said there was now a hole in the side of his face and he didn't know at the time whether he was going to live or not.

Bartlett also disputed what Durham police said -- that an argument started the incident.

While wrestling the flare gun from his attacker's hand, Bartlett says he realized he knew the gunman -- a local, homeless man -- he says he's offered help to in the past.

"At first I didn't know who it was. I didn't know until after I'd been shot and then he didn't expect me to turn around," Bartlett said. "His eyes got kinda big."

Employees at nearby stores and Panera customers say the news of the shooting was confusing and frightening.

"You know you would expect it to be relatively calm around this time," said Andrian Tucker, an employee at a nearby Learning Express. "You know we have a lot of home-school traffic around our areas around the morning."

Tucker said he was working across the street when he saw EMS and police cruisers surrounding the restaurant. He said he was shocked when he learned what happened.

"We come here for lunch like twice a week," said Panera customer Adela Mann. "So to hear that is very alarming and kind of scary."

Police were seen taking a man into custody and were interviewing witnesses. Forensics teams were on the scene sweeping for prints.

Bartlett said he has no idea why he was attacked, other than to suggest perhaps his assailant was mentally unstable.

While he recovers, Durham police are still investigating, and as of yet, no arrests have been made.

A previous version of this story incorrectly reported the victim was female.