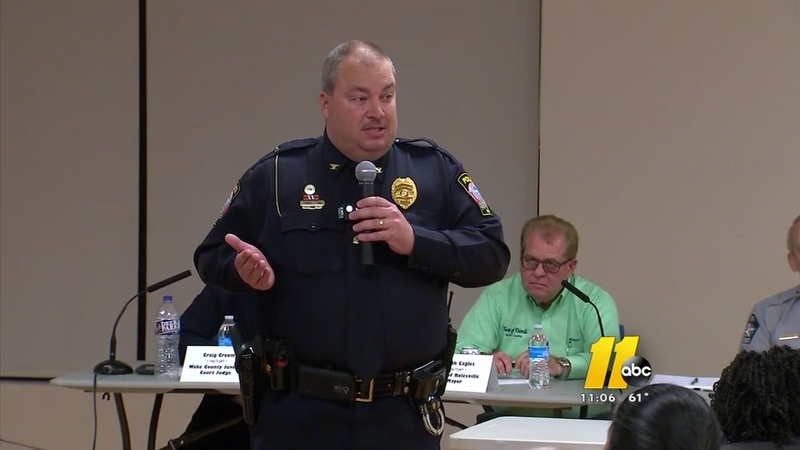 ROLESVILLE, North Carolina (WTVD) -- Cell phone video of a school resource officer body slamming a student to the ground led county leaders from all corners to the Rolesville Town Hall. The incident at Rolesville High School happened in early January, but the discussion of what role a school resource officer should play in schools has been ongoing.

Wake County Commissioner Jessica Holmes said when the cell phone video started circulating on social media, people immediately began reaching out to her on Twitter. They asked her what she was going to do about it.

Rolesville Police and the State Bureau of Investigation have been handling the investigation so she decided to invite residents to a panel discussion.

She invited a judge, the sheriff, the mayor of Rolesville, the chair of the Wake County school board and the public.

They agree that the role of school resource officer should be to keep students and staff safe and to be role models for students. Some on the panel also noted that the role has shifted to disciplinarian.

"We're not there to write tickets or put people in jail, but if you're in Wake County the laws are the same in school as it is out on the street," said Wake County Sheriff Donnie Harrison. "And if a teacher or personnel or a student calls us to something and we see a violation of law, we don't have a whole lot of choice."

County leaders say the problem is that schools are overwhelmed, and that students outnumber counselors by the hundreds. They need more bodies in schools.

Wake County leaders from all corners came to the Rolesville Town Hall on Thursday night.

"Counselors, social workers but we also need coaches where their sole job is to make sure we're reaching those children in our school system," said Monika Johnson-Hostler, Chair of the Wake County School Board.

Harrison said the SRO problems come from inconsistent training across all the departments across the county. He said he believes the school system would benefit from having its own police force.

Some parents did ask specifically about the incident with Rolesville Officer Ruben De Los Santos in January. They demanded answers and wanted to know what steps are being put in place to make sure that never happens again.

"At this time -- and this isn't the answer you want to hear -- but at this time dealing with situation out there, the investigation is ongoing by the SBI. And also Wake County Sheriff's Department is doing administrative review to turn over to me for administrative issues that may or may not have occurred," Langston said.