With Support Down Among Women, Trump Calls in His Wife 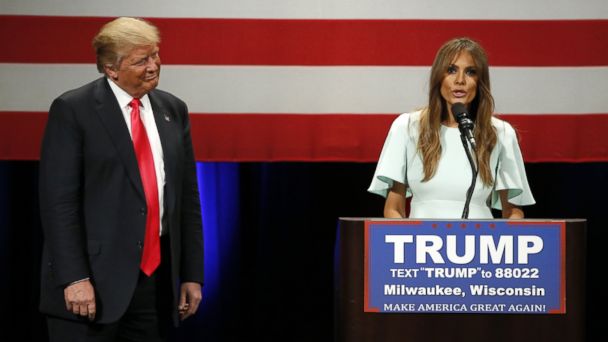 With his support among women voters slipping, Donald Trump called on a woman who knows him well -- his wife.

Melania Trump, in a rare campaign appearance, joined her husband on the trail Monday night ahead of the Wisconsin primaries. Mrs. Trump has appeared alongside her husband in the early contest states, but has never delivered a scripted speech as she did at the Milwaukee Theater to supporters.

"I'm very proud of him. He is a hard worker, he's kind, he has a great heart, he's tough, he's smart, he's a great communicator, he's a great negotiator, he's telling the truth, he's a great leader, he's fair. As you may know by now, when you attack him, he will punch back ten times harder," Melania Trump said to applause as part of her short scripted speech. "No matter who you are, a man, or a woman, he treats everyone equal."

A CNN/ORC poll from late March showed Trump is viewed favorably by only 24 percent of registered female voters.

After his wife, Trump called upon Melissa Young -- a former Miss Wisconsin whom Trump met after she was crowned the first unanimous winner of Miss USA's Miss Congeniality award in 2005.

"If this man becomes president of the United States of America, he is going to give me the best gift ever and that is I'll know when I leave this world I will not be here to watch my son grow but I will know he is going to grow up in a country that is safe. That is what every mother wishes for," said Young, who is suffering from an inoperable illness.

Ahead of Tuesday's vote, Trump's confidence has increased the last few days.

"I really believe tomorrow we're gonna have a very, very big victory. Very, very big," he said in La Crosse, Wisconsin. "If we do well here, folks, it's over. If we don't win here. it's not over but wouldn't you like to take the credit?"

Trump will campaign in Wisconsin Tuesday morning ahead of his first event in New York Wednesday evening on Long Island.