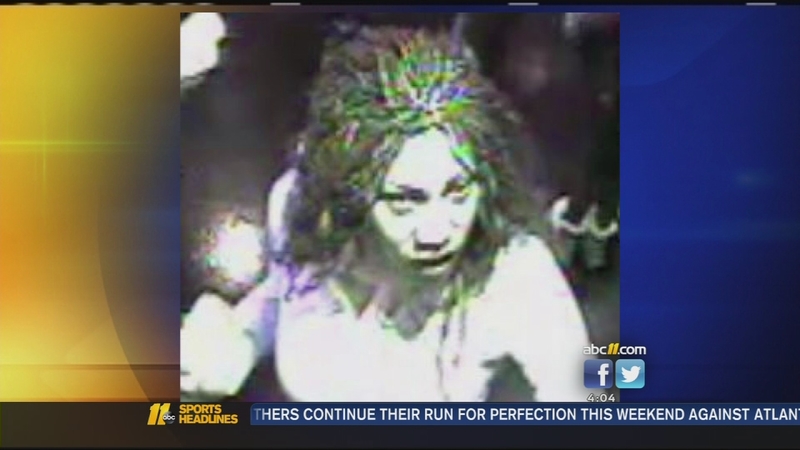 RALEIGH (WTVD) -- An assault on a child at a popular North Raleigh amusement center has investigators on the hunt for a young woman they believe is responsible.

Jasmin Kelly says she also watched as the suspect tried to punch another mother who intervened when children complained they were being verbally and physically abused.

Kelly says the mother told the young woman, "'You're cursing at our kids and you are pushing our kids.' All the kids are saying, 'She's pushing us', you know, at this point."

The suspect then said, '"F-blah, blah, get out of my way.' And she went, she just went to swing at her", Kelly added.

A uniformed Raleigh police officer hired by Adventure Landing to work off-duty took the suspect outside to defuse the situation but apparently didn't realize a child has complained that the young woman hit her.

But Kelly said her youngest daughter told her, "'She just like went and just slapped me, you know. I was just standing there.' And then my nine-year old said, 'Ma, when we were in there she went and she pushed me like this."

Photo shows red marks where the child was allegedly slapped

Kelly says she snapped pictures of her daughter's red and swollen cheek while her husband asked an Adventure Landing employee to tell the officer to hold the young woman because they wanted to press charges for assaulting a child.

But Kelly says the suspect was allowed to leave and when the employee came back she and her husband asked him about it.

"We told you that she had assaulted my daughter and you said you would come out and make sure the officer would hold her," Kelly said. "And he said, 'You know nobody is hurt and that's the important thing.'"

Adventure Landing employees tell a different version. This afternoon the company released a statement to ABC11 that reads, in part, "The officer removed the teens in question from the premises and minimized the confrontation in a manner he deemed appropriate. There was no evidence at the time that the children were in danger. The officer and staff member did not know until after the aggressors were off property the extent of the altercation stated by the parents involved."

The one thing everyone seems to agree on is that the suspect needs to be charged.

They hope someone will recognize her and tip them off. They say she is in her late teens or early 20's.