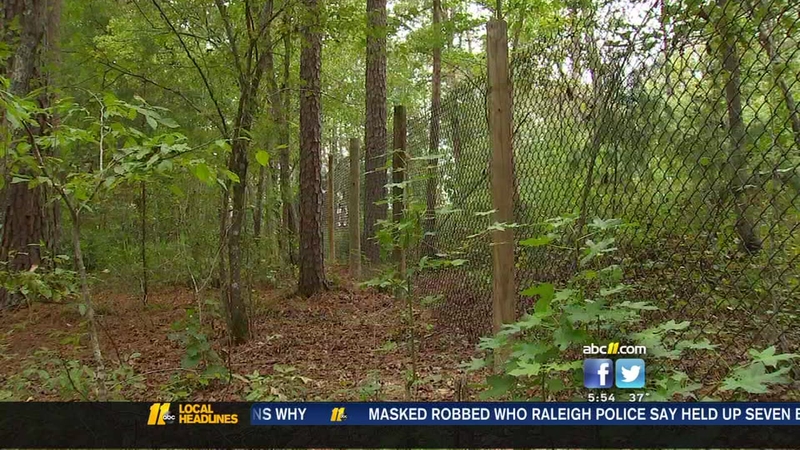 MONCURE, N.C. (WTVD) -- Earlier this year, a homeowner in Moncure decided she needed a large fence after a coyote attacked their beloved cat, Zelda, in their yard. The homeowner, Pat Shipman, took action and hired a company for the installation around her property.

"We needed a strong enough and tall enough fence so the coyote could not get in," she said.

Pat hired Lee Sullivan of Vickers Fence Company of Pittsboro to do the job. They signed the contract and gave a $7,000 deposit.

Soon after handing over the money, Pat said there were problems.

"There are weeks that go by and he doesn't show up," she said.

Work finally started to progress, and Pat paid Sullivan another $3,000. The fence around the perimeter finally got finished but Pat says she wasn't happy, "If we walk the perimeter, there are several places where it doesn't touch the ground. It had to be on the ground so the cat couldn't get out and the coyote couldn't get in."

Pat says she continued to call Sullivan, but the problems didn't get fixed.

"For most of the summer, I thought he was putting our cat in danger because he was not doing his job," she said.

Besides the fence not touching the ground in certain sections, Pat was upset because the electric gate they paid Sullivan for still did not have the electric portion installed. Pat and her husband had to manually open the gate each time they wanted to get in and out of their driveway.

Pat says she called Sullivan several times and was always told a crew would be there to finish the job. When it didn't happen, she got me involved.

I talked with Sullivan and he admitted the job was delayed and taking longer than usual. He said a key part for the electric gate was on back order and that caused much of the delay.

He did get a crew to Pat's house to fix the portions of the fence that did not touch the ground. Pat showed us the fix where Sullivan's crew put big logs to fill those gaps.

"I don't think that's very professional, plus it's going to rot," Pat added.

After a long wait, Sullivan said the part for the electric gate that was on back order is finally in. Pat says when crews tried to install it, it still didn't happen.

She said she was fed up and tired of the broken promises so she fired Sullivan. She says, "I just want it done and 4 months is crazy."

Pat said she just decided to cut their losses and move on. She said it was too stressful to be told their job would be finished and months later they were still waiting.

They have learn to accept that they will just have to open and close their gate by hand, instead of it being electric.

As for the fence keeping the coyotes out, so far the fence has been successful on doing that. Zelda is enjoying her freedom.