Your car could make you a victim of identity theft 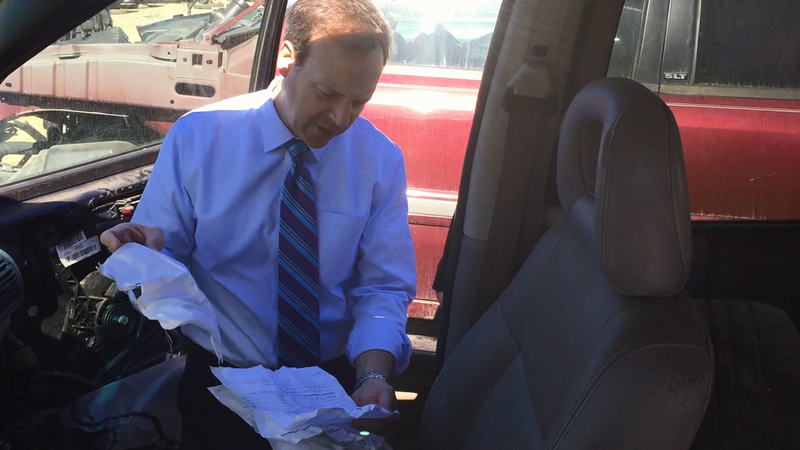 Your car could make you a victim of identity theft

RALEIGH (WTVD) -- Think about how easy it would be for someone to get their hands on the stuff in your car and steal your identity.

The I-Team discovered it's a real risk for people who've been in a car wreck, their car gets totaled and sent to the junkyard. Would you remember to clean it out if you're dazed in an accident?

Kellie Rhodes remembered the terror of her accident earlier this year. Her car started shaking. The steering wheel snapped while driving through an East Raleigh intersection last July.

"I had lost control of my car," Rhodes explained.

"At that point in time, I had jumped over the curb into this median, went up into the street and hit that pole," she said pointing to the intersection where the accident occurred. "I was terrified. I couldn't do anything. I was in shock."

She was hospitalized with minor bruises and her car was towed to a salvage yard.

The salvage yard is considered a "pick and pull" lot. For $2, you can enter to find a part for your car, but the I-Team found a lot more than that which could make you a victim of identity theft.

The I-Team spent days at this and other salvage yards in the area. It wasn't hard for us to find personal information left behind in cars that were in accidents or sold for scrap metal. It's information that in the wrong hands could put your identity at risk.

"Somebody's gonna have a good time with that," said Caroline Farmer, a lawyer from the NC Attorney General's Office.

Farmer gives talks on identity theft to the public.

The I-Team showed her some of the items snapped on our iPhone that we found.

Greg Brown is the owner of Raleigh Scrap Metal Recycling. His yard is not open to the public for car parts, but he says he finds all kinds of things in cars that are brought to him for scrap.

"We find all kinds of clothing and mail," Brown said.

"We have found wallets which we actually return. We call the people and return it. We have found identifications like from where they work with their phone numbers and the company names," he continued.

Brown says sometimes people just forget to clean out their car if they've gotten into an accident.

"Sometimes they are in a hurry, and if it's important, we do contact them, but people leave all kinds of stuff."

Kellie Rhodes thought she and her husband cleaned out her car before it went to the salvage yard, but they missed a check made out to a gas station for about $25. The I-Team found it and returned it to her.

"Oh, wow! They asked if we got everything out of the car, and I said yes and then a couple of months later I get a phone call from you all saying you found a check and I was like awesome," Rhodes said with a big smile on her face. "Well, thank you. Thank you!"

You might wonder why there's concern over finding an uncashed check.

The Attorney General's Office told us someone could easily order checks with your account number and clean out your bank account.

Rhodes told the I-Team getting the check back solved a mystery for her. She wasn't able to balance her checkbook without it.

Some salvage yards claim they do clean out vehicles before they dispose of them.

But, the I-team learned there are no laws that require them to do that so the responsibility is up to the vehicle owner.