Native American elder, teen at center of crowd in viral video speak out 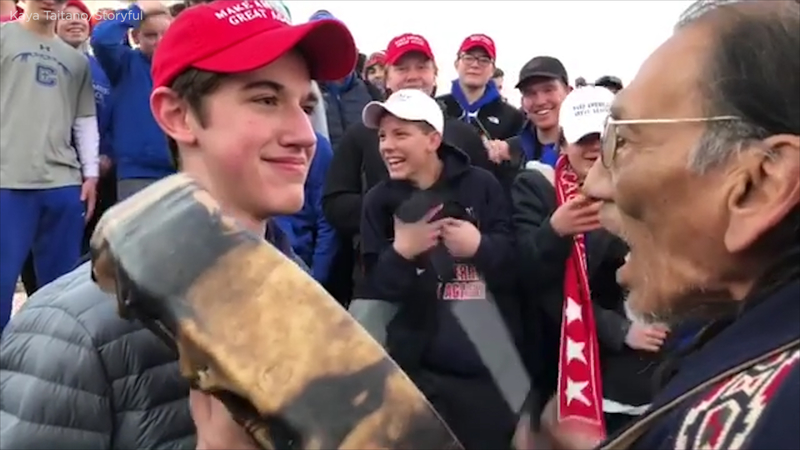 WASHINGTON -- After a Native American elder and a group of teens were at the center of a viral video showing a confrontation after the Indigenous Peoples March, both sides are speaking out.

The elder, Nathan Phillips, said in an interview with The Associated Press that he was trying to keep peace between the students and a black religious group that was also on the National Mall on Friday.

Other videos also showed members of the religious group, who appear to be affiliated with the Black Hebrew Israelite movement, yelling disparaging and profane insults at the students, who taunt them in return. Video also shows the Native Americans being insulted by the small religious group as well.

"Something caused me to put myself between (them) - it was black and white," said Phillips, who lives in Ypsilanti, Michigan. "What I saw was my country being torn apart. I couldn't stand by and let that happen."

Nick Sandmann, who said he was the student caught on camera standing near Phillips, shared his side of the story in a statement to local television station WHAS.

"I believed that by remaining motionless and calm, I was helping to diffuse the situation. I realized everyone had cameras and that perhaps a group of adults was trying to provoke a group of teenagers into a larger conflict. I said a silent prayer that the situation would not get out of hand," he said, adding that he smiled at Phillips "because I wanted him to know that I was not going to become angry, intimidated or be provoked into a larger confrontation."

"I never felt like I was blocking the Native American protestor. He did not make any attempt to go around me. It was clear to me that he had singled me out for a confrontation, although I am not sure why," he added.

Sandmann said he never heard his classmates chanting "anything hateful or racist at any time."

A student who was part of the crowd said Phillips approached one of his classmates as the Black Hebrew Israelite demonstrators accosted the group of students.

"The boy from my school didn't say anything or move - he just stood there. As time went on the man with the drum got closer to his face," the student, who wished to remain anonymous, told ABC News. "The guy with the drum yelled something at us that I could not understand. After a couple of minutes of the man standing there beating the drum in the boy's face, he walked away."

The Roman Catholic Diocese of Covington and Covington Catholic High School, which organized the student trip from Kentucky to Washington for the March for Life, issued a statement late Saturday apologizing to Phillips. They said the students involved, whose actions have drawn widespread condemnation, potentially face expulsion.