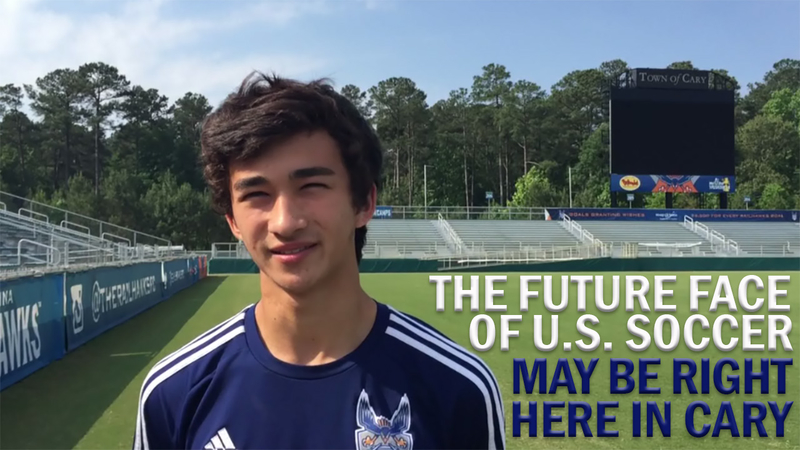 CARY (WTVD) -- The Carolina Railhawks remain in a cluster of five teams battling for the NASL Spring title. Just two games remain, and a 17-year-old could factor in the outcome.

"Kid's good. He's going to be special. And it's great to have him." Said Railhawks coach Colin Clarke.

Nick Taitague is only a high schooler, but his soccer potential is world class. The first step toward realizing it is learning the pro life here in North Carolina.

Taitague has already seen just about every corner of the world, including France, Spain, Croatia and Argentina.

Taitague's talent is his travel agent - he was spotted early by scouts, once spending 10 days training at Manchester United's Academy at age 14.

"Seeing like day in and day out, first team players in and out of the training ground, it's like unbelievable," Taitague said.

At just 5-foot-7, Taitague is hardly a bull, but with his skills he doesn't need to be. American players have traditionally been fit and fundamental, but the Virginia native has that little bit extra; the ability not just to fit into a puzzle, but to rearrange the pieces

"He's got a very quick first three or four steps to get past people," Clarke said. "Comfortable in possession, comfortable in tight spots. He's confident and he's cocky. He wants the ball."

What else does Taitague want?

"Getting involved in the attack and maybe scoring goals and creating opportunities," Taitague said. "Sticking players one on one, that's what I like to do and what I like to bring to the field."

His experience on the field with the Railhawks is helping to harden him to the physical demands of the game, but that's not the only thing.

"For being only 17 and the level that he's able to play at already," said Connor Tobin, a Railhawks defender, "man, if he can continue to just keep his head down and work every day - that kid can go to the top levels of football."