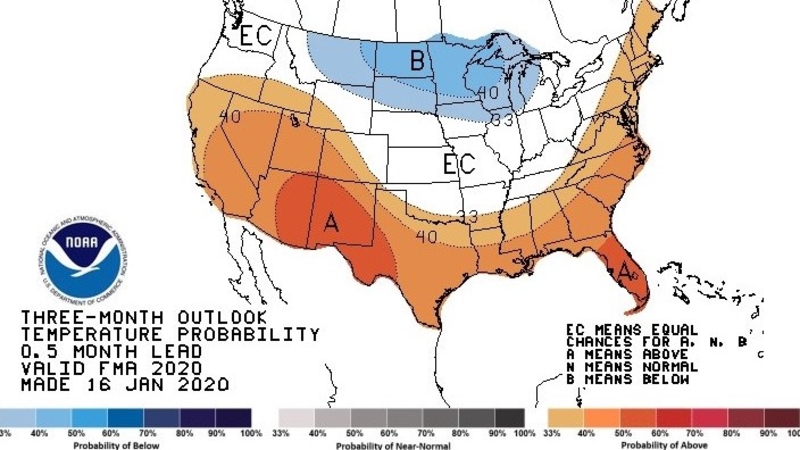 When it comes to climate and predicting the weather for extended periods, the folks at the National Oceanic and Atmospheric Administration, or NOAA, turn to their climate experts, the CPC. The Climate Prediction Center will look at various factors in the Earth's atmosphere, like ocean temperatures, and make statistical guesses at what a specific time period's weather might hold.

Last week, they issued their three-month long-range forecasts. These forecasts look at February, March, and April. They then look at parameters, such as temperature and precipitation, and try to give us an idea of what might be heading our way. Let's look at the temperature forecast first.

In North Carolina, and throughout the eastern and southern United States, there is a higher chance of seeing above-average temps. Our average high temp. ranges from 52.5 at the start of February, to 75.9 by the end of April in the Triangle. In the Sandhills, as expected, those numbers are a bit higher with 56.5 the average high on February 1st to 78.6 by the end of April. There forecast also shows winter hanging on the upper Midwest with below-average temps expected there.

Now, we'll take a look at our precipitation chances.

Across the U.S., the wetter than average area stays west of our region. The desert SW, and California, have higher chances for below-average snow and rain.

The sea surface temperatures, used in making the forecasts above, are pretty close to average this year. That means we will not be seeing the effects of El Niño or La Niña working to change up common weather patterns we usually see at this time across our country. Those effects are traditionally most influential in the winter.
Report a correction or typo
Related topics:
weatherncweatherspring
Copyright © 2021 WTVD-TV. All Rights Reserved.
TOP STORIES
LATEST: UNC expert says much to understand about Omicron variant
Man shot and killed in Fayetteville shopping center parking lot
Pedestrian killed on I-95 in Johnston County
Tiger Woods says his days of being a full-time golfer are over
CDC recommends vaccinated adults get booster amid omicron spread
Trooper injured in violent traffic stop awarded Badge of Bravery
Show More
After daughter's death, Fayetteville dad calls for end to gun violence
Renewed effort to curb Durham gun violence after Southpoint shootings
Post-Thanksgiving lines are long at Wake County COVID testing sites
Fire at Pilot Mountain closes state park, burns more than 300 acres
How small businesses are working around inflation, supply-chain issues
More TOP STORIES News