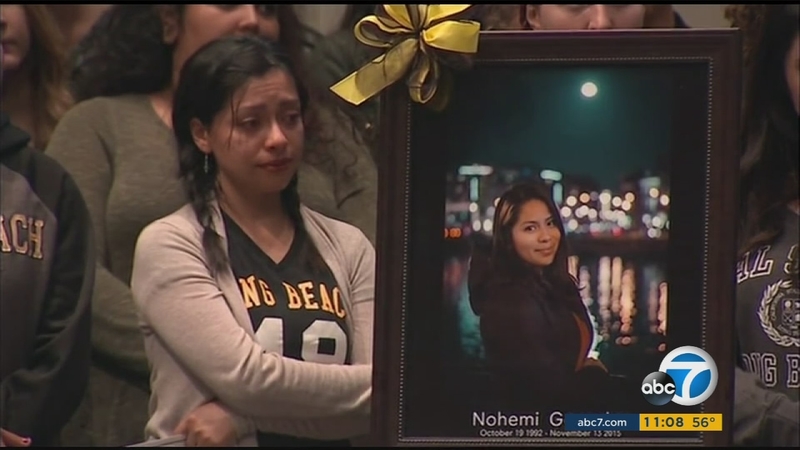 Gonzalez, 23, of El Monte, was in the French city attending Strate College of Design as one of 17 students taking part in a semester abroad program.

The vigil took place inside a CSULB ballroom at 4 p.m. Sunday. It included a tribute to all victims of the Paris attacks.

Hundreds of people filled the ballroom to capacity as administrators, professors, friends and family members recalled fond memories of Gonzalez and her ambitious spirit.

Her boyfriend of four years, Tim Mraz, said Gonzalez was his Pocahontas because of a tattoo on her left arm and that she called him her John Smith.

The chair of the design department said Gonzalez was a "charismatic leader," who was generous with her knowledge and time as a student assistant.

Family friend Jonathan Galicia said his heart went out to Gonzalez's parents, who he's known for years, and that it's still hard to process that she's gone.

"You hear these things on the news and you wouldn't think that it would happen so close to home," he said.

Michael Uhlenkamp, executive director of news for the CSU system, said CSULB confirmed that the other 16 students in Paris were safe.

At least 129 people were killed in Friday's coordinated terrorist attacks, which the Islamic extremist group ISIS has since claimed responsibility for.

Gonzalez's mother, Beatriz Gonzalez, struggles to cope with the loss of her child, who family members called "Mimi."

"I feel lost, sadness and she was my only daughter," she said. "She was a very strong young woman. She had big decisions, when she went to do something she committed to whatever she was doing."

One of her Long Beach schoolmates in Paris saw Gonzalez get shot in the stomach, but she was able to escape from the Le Petit Cambodge restaurant. She told school officials she saw Gonzalez carried away on a stretcher.

The university was notified of her death by French school officials and confirmed the death with her parents, Uhlenkamp said.

Design professor Michael Laforte said the department was a small family and that Gonzalez's passing deeply impacted everyone.

"Nohemi was something of a star in our department. She was a shining star," he said.

The family said the FBI informed them it could be weeks before the body is returned to the U.S. because of the ongoing investigation.

"When it was confirmed, I think we were all in disbelief, still hoping it was not true and she would show up in rubble or something, you know, not dead," Sandra Felt, Gonzalez's aunt said. "I'm going to miss her beautiful smile and her common sense. She was something else."