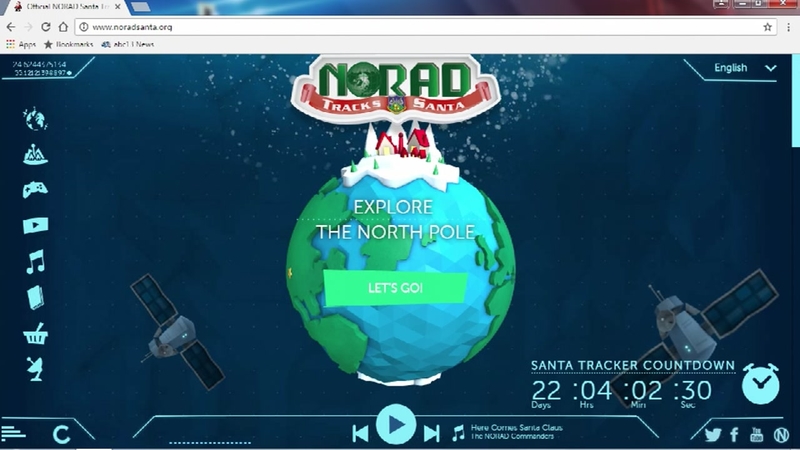 NORTH POLE -- It's beginning to look a lot like Christmas at NORAD headquarters!

Every Christmas Eve, the agency which is a joint effort of the governments of the United States and Canada, uses its cutting-edge tracking technology to track the movement of Santa's sleigh as he delivers presents the world over.

Until then, however, Santa and his elves are busy laboring away at the North Pole to prepare for their trans-global journey. On the website, you can explore Santa's workshop, listen to Christmas carols and play holiday-themed games.

For decades, NORAD Tracks Santa was a phone service, where interested parties could call in for real-time updates on Santa's location as he traversed the globe.

With the advent of the web, NORAD moved the service to a website with an interactive map in the late 1990s.
Related topics:
societysanta clausholidaychristmas
SANTA CLAUS
Santa's house valued at more than $1 million, according to Zillow
NICU patients at Charlotte hospital dress up for their first Christmas
'Santas Just Like Me' aims to provide inclusive Santa experience
Fort Bragg's 'Operation Toy Drop' brings joy to military families
TOP STORIES
More than 75,000 pounds of baby formula lands in US amid shortage
Clayton police arrest man in shooting that injured 1
Biden: US would intervene with military to defend Taiwan
Wake County begins giving COVID booster shots for children ages 5-11
Biden: Monkeypox threat doesn't rise to level of COVID-19
Pfizer: COVID vaccine for kids 6 months to 5 years old 80% effective
Texas woman sought in fatal shooting of pro cyclist: US Marshals
Show More
Zibanejad leads Rangers to 3-1 win over Hurricanes in Game 3
Russian sentenced to life in Ukraine's 1st war crimes trial
1 person in hospital after a pedestrian was hit crossing I-95
Event for Ukraine raises money for paramedics on frontlines
Barber attempts to cut concerns about violence in Durham
More TOP STORIES News