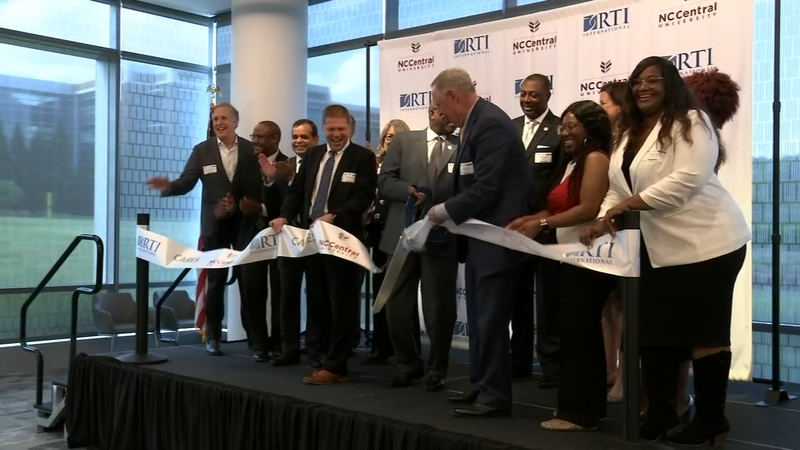 RESEARCH TRIANGLE PARK, N.C. (WTVD) -- It's a partnership that's been in the works for about four years and now it's here. North Carolina Central University is beefing up its status as a research institution by teaming up with the Triangle's premier research nonprofit. The pair set their sights on solving some of the area's most vexing environmental justice issues.

They held a ribbon-cutting ceremony, Thursday night, on the newest addition to RTI International's sprawling campus in Research Triangle Park. The research giant is partnering with Central, its nearby neighbor in Durham, for this shared lab space to study the role the environment plays in health and disease and the disproportionate impact on underserved communities.

"One of the things that we know is there are marginalized and disadvantaged populations that go back generations," said RTI President and CEO Tim Gabel. "And I think this allows for NC Central and RTI international... and the country, frankly, to benefit from the research in this lab."

It's researchers from Central side-by-side with scientists with RTI working to get to the bottom of causes and molecular breakdowns of the harmful chemicals and intoxicants that too often end up polluting lower-income communities primarily made of Black and Hispanic residents. They call it the Center for Applied Research in Environmental Sciences -- or CARES.

"CARES, what we intend to do is not only address these exposure intoxicants at the molecular level but also address how we can educate our communities and how we can address these issues from a social justice and environmental justice perspective," said Deepak Kumar, director Central's Julius Chambers Biomedical and Biotechnology Research Institute.

Durham has seen its share of discriminatory environmental wrongs through history: Three of the four city trash incinerators were placed in Black communities, or in the 1930s when city leaders left Black neighborhoods out of a plan to beautify streets with new trees.

The CARES lab promises to not just examine the science but focus on accountability, too.

"It's not just enough to say this community has been exposed to chemic x, y, z or mixture x, y, z. What are you gonna do about it," said Keith Levine, RTI's senior director of Analytical Sciences.

The partnership also provides a huge boost for North Carolina Central and the Historically Black College and University's bid to establish itself as a research university, right up there with Duke, NC State and UNC-Chapel Hill.

"It's a major partnership," said NCCU Chancellor Johnson Akinleye. "We made a concerted effort to say, 'Look, we are here. And we are doing major research in our institution. We may not be a flagship but we are pulling our weight.'"