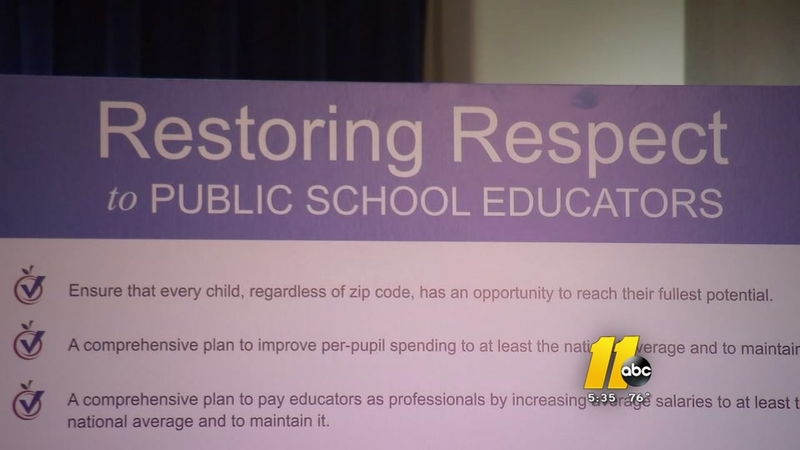 The North Carolina Association of Educators, the state's largest teacher advocacy group, rolled out a list of demands Tuesday morning at the legislative building on Teacher Appreciation Day.

Among the group's top concerns is teacher pay.

.@ncae calling on lawmakers to restore respect to educators on #NationalTeachersDay #abc11 pic.twitter.com/hboZpYnIoE

"I'm one of those teachers that's been in the system long enough that I'm not feeling the effects of the pay raise that the governor's been passing down. So in order to pay back student loans and things like that I have thought about leaving the profession," said Guilford County teacher Angela Waiters Jackson.

14.8 percent of teachers in North Carolina left their position in 2015. Some left the profession altogether.

"The policies that have been put in place by the state of North Carolina and this General Assembly over the last few years have made our teachers feel like they're part of the problem rather than part of the solution," said Rep. Graig Meyer.

Teachers and principals would get a 3.5 percent bonus and veteran teachers with more than 24 years of service would get an extra $5,000.

Legislators are expected to discuss his budget proposal later this week.

"We remain optimistic that we will see some significant increases for educators throughout the state, but until the process plays out we just can't put a lot of faith in it at this time," said NCAE president Rodney Ellis.

"On average (teachers) got a 7 percent pay raise last year which was the highest in the country. Now, there was a lot of variability in that, and I realize in the last few years the raises have been smaller than that, but I do believe it's a step in the right direction," said Bob Luebke with conservative-leaning NC Civitas Institute.

"We can only do this in pieces. We can't do everything at one time," he said.