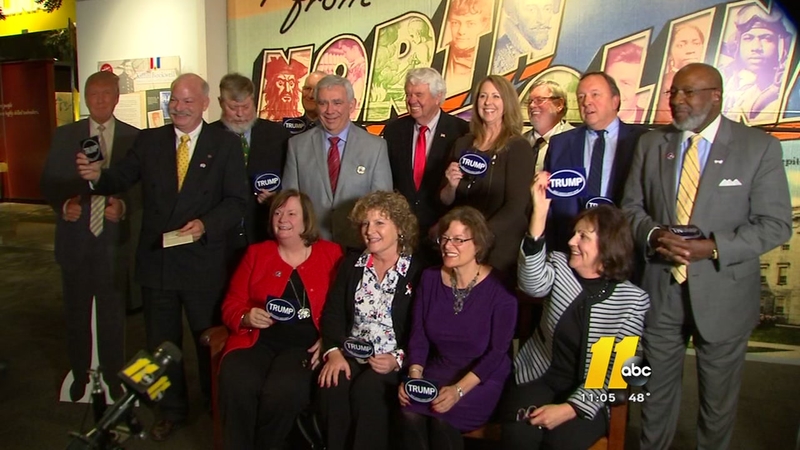 Electors in North Carolina say they will vote for Trump

RALEIGH (WTVD) -- North Carolina electors rehearsed on Sunday for Monday's historic moment where they plan to vote to officially elect Donald Trump as President of the United States. Soon after, a vigil was held to encourage them not vote or to change their vote.

United for America, a bipartisan group asking the NC Electoral College to change their vote against @realDonaldTrump @ABC11_WTVD pic.twitter.com/kExjyeqBiz

Unite for America, a bipartisan group, organized the vigil. They said there are other Republicans they could tolerate easier than Trump and vice president-elect Mike Pence.

ABC11 was there as the Republican electors posed for a photo op.

Afterwards, they talked about harassing calls and letters from people demanding they change their vote.

North Carolina electors getting into #Formation for a photo op with life-size @realDonaldTrump cutout @ABC11_WTVD pic.twitter.com/3MjSf883re

"My good friend Ann here actually got some sort of irritant in one of the letter. My son had his car vandalized," said Mike Delk, President of the NC Electoral College. "Other people have received threats, attempted bribes."

But the electors say they are not swayed by these actions. All 15 said they will cast their votes for Trump which will go toward the 270 elector votes required. Trump's nationwide total is 306.

The members said they have a message for those protesting the results.

"It really shows a lack of understanding of our democracy," said Dr. Glenn Pinckney, Secretary of the NC Electoral College. "It shows an honest lack and disrespect."

The group says the majority of the letters they received were some form of harassment. Only a handful were formal petitions.

The GOP says they may file a complaint.