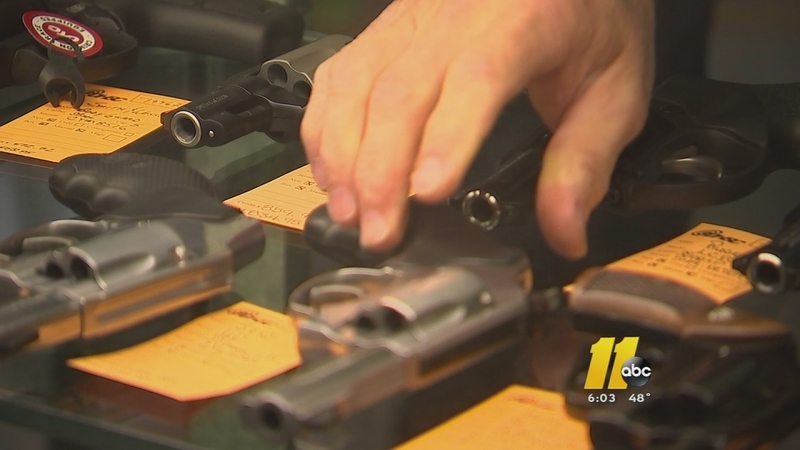 Gun sales around the Triangle are up in the wake of the California shootings, and that meant a steady stream of customers at the Personal Defense and Handgun Safety Center on Tryon Road in Raleigh.

"When we walked in a little earlier," said Charles Long of Garner, "I asked the gentleman, 'Are you going to be busy today?' because people realize it could happen anywhere. It's not just in the big city. It can happen in small towns and it can happen in big towns. And I think you have the right to protect yourself."

"People become frightened," chimed in John Midyeete of Raleigh. "They feel like they have to protect themselves. The police are a wonderful thing, but they're not standing right here beside you. They're not here to protect me, now." Midyette touched the pistol on his belt. "This protects me now, if I want to carry it. It's that simple."

"It seems like the whole solution nowadays is, get rid of guns and everything else will go away," Long said. "But yet the people in California had explosives and if they don't have guns, they'll have other means of trying to implement their way of living. I just think you have the right and you should have the right to have a hand gun."

In the wake of the #SanBernardinoShooting, we want to know your thoughts on the gun debate: https://t.co/EFHbDDEk6i

Gun control advocates are adamant that they don't want to do away with the Second Amendment or 'get rid of all the guns.' Still they say the proliferation of firearms in America is a big part of the problem.

"I think adding more guns to any situation is going to increase the likelihood that people get shot," said Sarah Sidney with the advocacy group Mom's Rising.

"America has one of the highest gun ownership rates in the world," said Sidney. "There are a lot of 'good guys' with guns out there. We also have one of the highest gun death rates in the world. Clearly, the 'more guns is the answer' isn't working. We've tried that. I think it's time to change course and look at the correlation between the number of guns in circulation and the number of gun deaths."

"I don't think it's a coincidence that both are very high in America," Sidney continued. "Unfortunately, I think many Americans have become numb to it.

Back at the gun shop, the idea of more regulations got mixed reviews.

"I favor controls in terms of who can legally and safely have a firearm," said Midyeete. "But how do you do that?"

"With the number of weapons that are out there in the field," Long said, "it's not practical to say 'we're going to do away with all the guns in the nation.' If you started a new nation, you might could do that, but that's not going to happen in this country. And it's not the way the Constitution writers wanted to have it."

Still, Midyeete says the idea of new regulation shouldn't be off the table.

But Grassroots advocate Paul Valone, who spends time and energy lobbying for looser gun restrictions in North Carolina, says while training is advised, it shouldn't be a prerequisite.

"Each of us is responsible for our own self protection, all the time," he said. As for California, "that was a classic example of the adage that when seconds count, help is only minutes away."