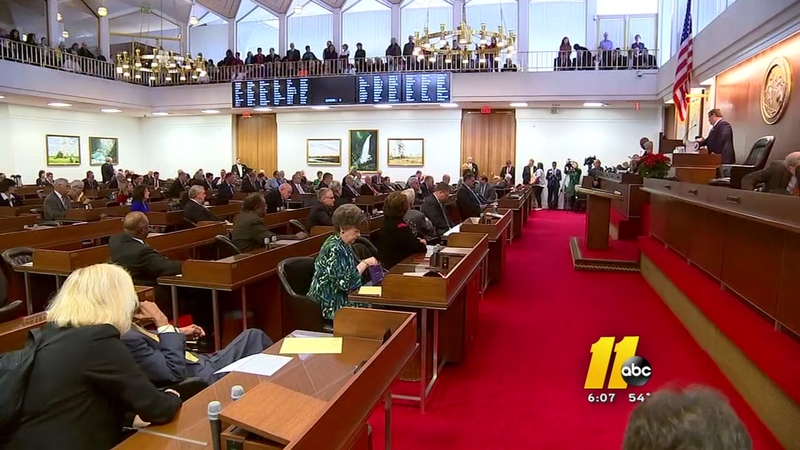 This year's work period is likely to adjourn sometime this summer:

Eighteen House members and five senators took their seats this month for the first time. Republicans hold 35 of the 50 seats in the Senate and 74 of the 120 House seats.

While Berger and Moore remain at the top, other influential lawmakers have left, including Senate Rules Committee Chairman Tom Apodaca and Sen. Bob Rucho, the architect of tax code overhauls. Apodaca will still be around as a lobbyist for high-profile clients. House Judiciary Committee Chairman Leo Daughtry and Speaker Pro Tempore Paul Stam didn't seek re-election.

The Legislative Building is even getting a face-lift, with workers refreshing the five pyramids on the roof with new copper plates.

Unlike former Republican Gov. Pat McCrory, who had no legislative experience, Cooper is an ex-legislator and as attorney general pressed his initiatives with lawmakers. While the familiarity could help him avoid legislative potholes, Republicans still hold large enough House and Senate majorities to override any Cooper veto if unified.

A measuring stick for Cooper and legislative Democrats is whether they'll be able to persuade enough moderate Republicans in each chamber to uphold vetoes on bills those GOP lawmakers dislike.

"Are they willing to put their votes where there beliefs are when Gov. Cooper vetoes legislation that they're opposed to?" asked veteran Rep. Grier Martin, D-Wake. "There's nothing that we can be successful on without Republican support."

Cooper also faces a new challenge because his Cabinet faces Senate confirmation, although he's sued to stop that requirement.

Cooper and legislative leaders came close in December to repeal of House Bill 2, the law approved last March that limits broad LGBT antidiscrimination rules and directs which public restrooms transgender people could use. But a deal fell apart in a one-day session, with Republicans appeared split on backing repeal.

Moore and Cooper say conversations continue about HB2, which has been blamed for job losses and harming the state's image. Moore said there could be compromise, but Cooper wants nothing but full repeal and insists there are enough votes right now for it. Efforts at repeal are expected to be carefully calculated to avoid another breakdown like December.

The Legislature's primary responsibility is to approve the budget beginning July 1 through mid-2019. If history is any indication, House budget writers will propose spending a little more than Senate counterparts. Cooper will offer his own budget proposal, but it will be difficult to get Republicans to approve his high-profile suggestions.

Any spending expansions will be tempered.

"Let me be clear: we will not, under any circumstances, return to the failed tax and spend policies of the past that gave us the mess we inherited" when Republicans took over the legislature in 2011, Berger said Jan. 11 in his Senate leader acceptance speech.

Cooper backs a teacher pay plan to reach at least the national average. Republicans aren't framing their efforts that way. Berger said his chamber is committed to move the roughly $50,000 average today to $55,000 in two years. Moore hasn't committed to specifics.

A directive by federal judges to draw new General Assembly maps by March 15 has been blocked for now by the U.S. Supreme Court.

Lawmakers also are listening to concerns of school districts about a directive lowering maximum class sizes in early grades this fall. Districts are worried they'll have to get rid of other programs to comply.