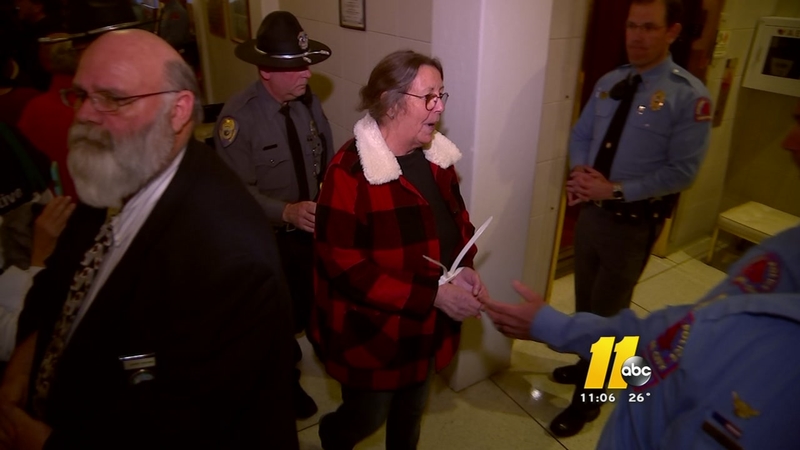 RALEIGH, North Carolina (WTVD) -- They were the most raucous hours yet of the surprise special session; Republicans charging ahead with legislation aimed at diminishing Roy Cooper's power, Democrats looking dispirited, and many protesters leaving in handcuffs.


Inside the House chambers, protesters didn't hold back from the gallery -- shouting their frustration. But as the day wore on, Republican House Speaker Tim Moore had heard enough.

"Sergeant at Arms will clear the gallery!" Moore shouted in exasperation from the podium.

Protesters were ushered out of the chamber. But, their displeasure echoed through the halls.

"Shame, shame, shame!" yelled the demonstrators from just outside the chamber's doors.

All of this on Day 2 of the surprise session called by Republicans to pass a flurry of bills aimed at undercutting Cooper before the Democrat takes over as governor January 1.
Thursday night, the House passed HB17.

Number of arrests at @NCLeg now at least 20. Chants then songs. Crowds starting to file out now. Live reports ahead on @ABC11_WTVD #ncpol pic.twitter.com/QR1DL6f9o1

The bill sharply reduces the number of Cooper appointees to state government. It requires all of Cooper's top agency heads to be approved by the Senate. And it strips Cooper of his power to appoint trustees to the boards of UNC System schools.

Add those measures to last night's bill in the Senate which takes away Cooper's power to appoint Democratic majorities to state and county election boards.

"Everybody's tired, everybody's upset," said Knightdale Democratic Rep. Darren Jackson -- his party powerless to stop the GOP supermajorities in both chambers amid the torrent of surprise legislative maneuvers that began on Monday as a special session about providing disaster relief.

Protestors at @NCLeg chant "Thank you/We love you/" & "Stand up/fight back" to those arrested. I count 5 so far. @ABC11_WTVD #ncga #ncpol pic.twitter.com/ZT3uYZR1cD

"We have members that are out of clean clothes because they didn't know they were going to be here the full week. This is just not the way to run a $20 billion state budget," Jackson said.

Now it's the House gallery getting cleared as protesters chant: "All political power comes from the people." #ncga #ncpol pic.twitter.com/0zXPkJfAgU

"I asked a couple of the protesters what they were protesting, they weren't sure. But they were sure they had been paid and got a free lunch and transportation," Lewis said.

The bills would need Gov. Pat McCrory's signature to become law. McCrory has not commented publicly on the measures.

But first, the bills need to pass the House and the Senate. Both chambers go back in session Friday morning for what may be the final day of the surprise session.

Cooper said he will fight any bill he considers unconstitutional and perhaps even sue to prevent it taking effect.

"If I believe that laws passed by the legislature hurt working families and are unconstitutional, they will see me in court," Cooper told reporters.

"I think to be candid with you, that you will see the General Assembly look to reassert its constitutional authority in areas that may have been previously delegated to the executive branch," Rep. David Lewis (R-Cumberland) told reporters during a recess on Wednesday.

Cooper condemned the special session in a news conference Thursday morning.
"Most people might think this is a partisan power grab, but it is really more ominous," said Cooper. It's really about hurting public education, working families, state employees, health care, and clean air and water."

Republicans countered the criticism from the left, saying Democrats have made the same kind of moves when they've taken over power in the past.

"People can fuss about the process but let's be honest. These people would just be as unhappy if we passed it a month from now. They don't like what's being done but they were OK with it when the Democrats did it. There's hypocrisy here," offered N.C. GOP Executive Director Dallas Woodhouse.

Stay on top of this story with the ABC11 News App