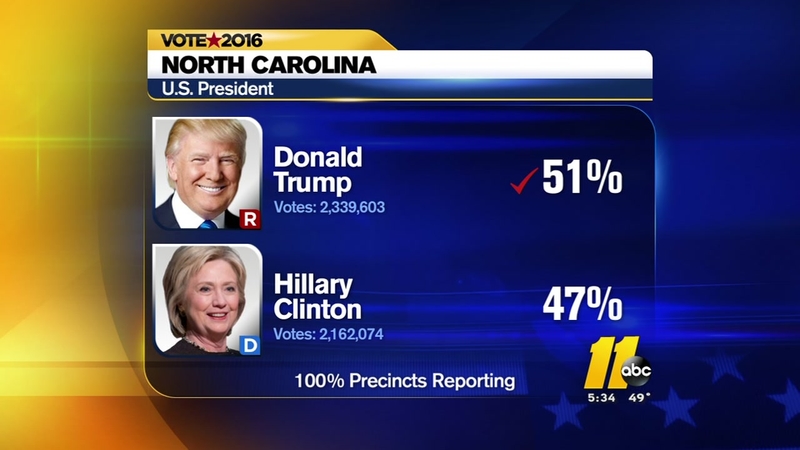 Scores of American citizens woke up Wednesday to discover the country had elected Donald J. Trump to be the nation's 45th president.

The battleground state of North Carolina played a crucial role in the election with our 15 electoral votes.

President Barack Obama won the state in 2008, and Mitt Romeny won in 2012. Trump turned the state red once again, and his supporters in NC are hoping he can bring about the change he promised during his campaign.

"It's not the end of days, and I don't think it's an apocalyptic moment that some of them are pushing towards, but you know maybe there are some things he can bring to the table that we can use," said Trump supporter Richard Camos. "And God knows, we need it now."

Some Clinton supporters in the Tar Heel state worry Trump's presidency will have negative implications for women's rights.

"Today I was going in to vote when my grandmother barely had the chance to, and I was going into vote for a woman president," said Clinton supporter Cameron Tessener. "And now I may not have the right to make personal choices for my own body, I might be having my government do that."

Here's how some NC counties voted

Here is a breakdown of how North Carolina voted from an ABC News analysis:

Gender gap: Fifty-four percent of voters in North Carolina preliminary results are women, and they voted for Clinton over Trump by 13 points. Trump, however, came back with a strong showing among men. The gender gap could be a record.

Race: Thirty percent of voters were nonwhite, with 21 percent black - both close to their levels in 2012, 30 and 23 percent, respectively. Nonwhites went for Clinton 80 to 15, slightly off Obama's 88 to 12 percent in this group 2012. Again, Trump pushed back with a big advantage among white voters.

HB2: Sixty-six percent of North Carolina voters say they oppose the so-called bathroom law, and they favored Clinton over Trump by about 2 to 1. Those who support the law were a strong Trump group.

Nearly half of voters, 49 percent, were not born in North Carolina, a very high proportion of the vote. Fifty-one percent were native North Carolinians. The former broke for Clinton, the latter for Trump.