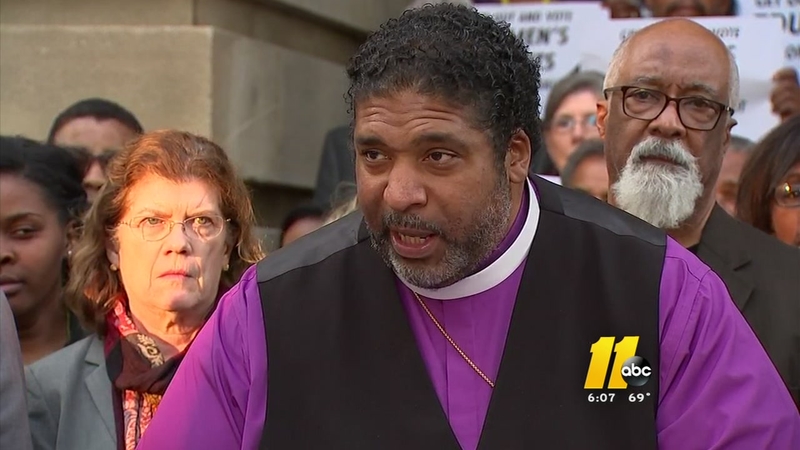 Barber's message was clear: North Carolina election officials are in direct violation of the National Voter Registration Act of 1993.

"Voter fraud is nonexistent ... it is in fact voter suppression that is the real threat in this election," Barber said.

The state's NAACP president says a 100-year-old Belhaven woman had her voter registration illegally challenged because officials received a piece of returned mail marked as "undeliverable." Barber went on claim there are another 400 people in Moore County who are being challenged as well.

Barber continued his address by urging election boards across the state to extend early voting hours for working people, extend weekend hours, and introduce a mobile voting vehicle that would travel around the state allowing people to vote.

"It's our time, it's our vote," shouted the crowd of supporters as Barber continued his address.

At the beginning of Barber's message, he claimed North Carolina is facing two storms. The first of the storms is the aftermath of Hurricane Matthew. And the second storm is what he says is voter suppression.

"Efforts to silence both of these continue even as our communities are battling the impact of physical and psychological reality of Hurricane Matthew and the floods," Barber said.

Barber continued by referring to voter suppression as an "unchecked, extremist culture ... that has blessings of the some of those in the highest position of power and regrettably some of those at the top of the ticket on our ballot."

ABC11 reached out to the NCGOP for response. Executive Director Dallas Woodhouse said "Barber's Democrat voters are not suppressed just depressed because they have nominated a presidential candidate herself under FBI investigation that once referred to black youth as super predators. They also nominated Roy Cooper for governor, who as attorney general ran a disgrace of a crime lab, leading to innocent blacks being put behind bars. Barbers voters are not suppressed but depressed that Democrats can't offer them anything better than Clinton and Cooper."