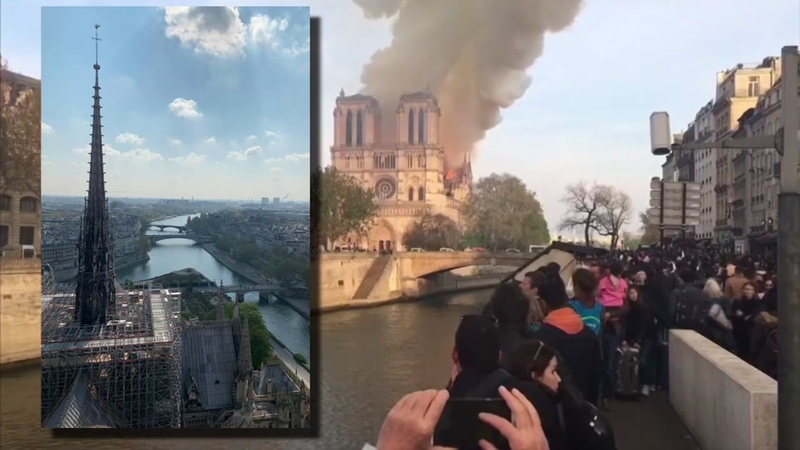 RALEIGH, N.C. (WTVD) -- Thirty million people per year visit Notre Dame Cathedral, 30,000 people a day. And, just Sunday, that line of tourists included Leslie Burgess Jandrain from Raleigh who became one of the last people to see and touch that 850-year-old cathedral while it was still fully intact.

"We're very close, right now, you can see it behind us," said Jandrain as she spoke with ABC11 via FaceTime from the streets of Paris.

Jandrain and her travel partner Joan Taylor, who lives in Trenton, NC, held up a phone, just two blocks from Notre Dame, where you could still see the orange glow of fire burning in the iconic cathedral.

The fire engulfed the centuries-old French landmark, just a day after Jandrain, who is on vacation from her home in Raleigh, snapped a picture from one of Notre Dame's towers. Her camera capturing the majestic spire. One day later, the spire crumbled away under the heat of the flames.

Tonight, we're talking to the Raleigh resident who took this photo of the Notre Dame spire yesterday, hours before today's "collosal" fire that caused the spire's collapse. #abc11 pic.twitter.com/njeHcQo9LW

"My sister texted me and said something to me about a fire and I said 'what are you talking about?'" Jandrain said.

As the fire burned Monday, Jandrain and Taylor were taking a boat tour down the River Seine where the cathedral stands on an island.

"We were not able to (get close to the cathedral)," Jandrain said. "The boat had to turn around when we got to the point of the island. We were able to able to see (Notre Dame) and see the flames ... the smoke was immense. It was crazy."

Back in Raleigh at des Livres and Delices, the French book and gift shop at Five Points, the owners, Laurence and Phillip Kneuss, two French ex-pats that now call Raleigh home, recalled their days living in Paris.

For many in France, losing Notre Dame is like losing a member of the family.

"We are very sad. We're very sad. It's a symbol of Paris, Laurence said. "It's part of our culture."

At 850 years old, Notre Dame is one of the world's most important pieces of Gothic architecture. It's survived the French Revolution and two world wars.

The fire-fueled heartbreak is being felt from here to Paris where stunned witnesses watched helplessly.

Jandrain told ABC11 that her vacation will continue; that she was inspired by the resilience she saw and heard in France on Monday.