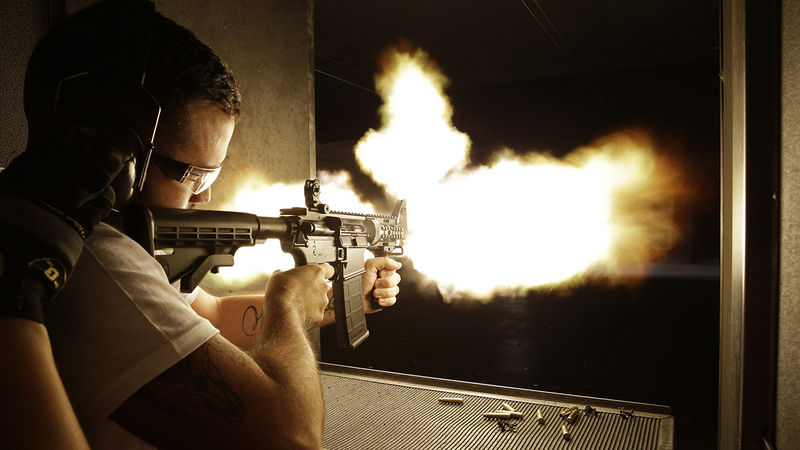 Unraveling the gun debate: The terms you need to know

As the debate over gun control continues to intensify, advocates on both sides are throwing out many of the same buzzwords. We've all heard them over and over again, but do we know what they really mean?

If you're struggling to unravel the rhetoric surrounding gun control, this glossary will help you understand commonly used firearm-related terms. It sources the National Rifle Association, the Associated Press and various reputable dictionaries to define words and phrases that come up often.

A firearm is a "weapon from which a shot is discharged by gunpowder," according to Merriam-Webster. The word "gun" can refer to any firearm, according to the Associated Press, while the NRA defines the word more broadly as referring to rifles, shotguns, handguns, airguns and cannons, all of which are not necessarily firearms.

Handguns are short-barreled firearms that can be held and fired with only one hand, according to Webster's New World College Dictionary. Pistols and revolvers are both handguns, and they are differentiated by their structure.

Unlike handguns, rifles are designed to be fired from the user's shoulder and have a rifled bore. Shotguns are smooth-bored shoulder guns that are usually used to fire small projectiles like balls, pellets, beanbags, shots and slugs.

The National Rifle Association's Institute for Legislative Action defines an automatic firearm as one that is "designed to feed [rounds], fire them, eject their empty cases." That will repeat so long as the trigger is held and additional cartridges are available in the feed system. A semi-automatic firearm, on the other hand, is designed to "fire a single cartridge, eject the empty case and reload the chamber" with each trigger pull.

A bump stock is an accessory that allows a semi-automatic rifle to mimic a fully automatic weapon. It was originally designed to help those with disabilities more easily fire a gun but recently came into the public eye after several of the devices were found at the scene of the Las Vegas shooting in October 2017.

"Assault weapon" is a loosely defined term used to describe certain types of firearms. In 1994, the now-defunct Public Safety and Recreational Firearms Use Protection Act delineated certain models like the AR-15, AK-47, Uzi and AR70 that qualify as "semi-automatic assault weapons." It also listed several features that could qualify a firearm as an assault weapon.

While the term "assault weapon" is often used interchangeably with "assault rifle" -- a conflation that some take issue with -- various groups do draw distinctions between the two and some jurisdictions do have laws that further clarify the two terms.

According to the Associated Press, an assault rifle "is a military weapon with a selector switch for firing in either fully automatic or semi-automatic mode from a detachable, 10- to 30-round magazine." The NRA prefers a U.S. Army-derived definition of a "selective-fire rifle chambered for a cartridge of intermediate power."

The Bureau of Alcohol, Tobacco, Firearms and Explosives (ATF) is a federal law enforcement agency located within the Department of Justice. According to its website, its responsibilities include "the investigation and prevention of federal offenses involving the unlawful use, manufacture, and possession of firearms and explosives; acts of arson and bombings; and illegal trafficking of alcohol and tobacco products." It also regulates the sale, possession, and transportation of firearms, ammunition and explosives.

Conversely, the National Rifle Association (NRA) is a gun-rights advocacy and lobbying organization that calls itself "America's foremost defender of Second Amendment rights." It boasts nearly five million members around the country is known for its hefty political spending.

Editor's note: This glossary defines words and phrases as they are used in American English. Some of them are used differently in other parts of the world. Even within American English, some of them are used differently by different groups.
Related topics:
weaponsparkland school shootinggun safetygun controlgun violencegun lawsnrau.s. & worldguns
Copyright © 2022 WTVD-TV. All Rights Reserved.
TOP STORIES
Snow, sleet, freezing rain expected again this week
Voting bill collapses, Democrats unable to change filibuster
'We can't get any more': Stores struggle to restock shelves
Third arrest made in Black Friday shooting at Streets at Southpoint
Daniel Turcios shot 5 times after crash on I-440, RPD reports
NC legislature votes to further delay primaries until June 7
'He was special': Durham friends remember Andre Leon Talley
Show More
Cumberland County mom spins way to $500,000 lottery prize
Victim in fatal I-85 crash was just 3 months old
19-year-old military driver charged in wreck that left 2 Marines dead
Earnhardt Jr. to be inducted into NASCAR Hall of Fame
Raleigh man feels lucky to be alive after bullet found above his bed
More TOP STORIES News