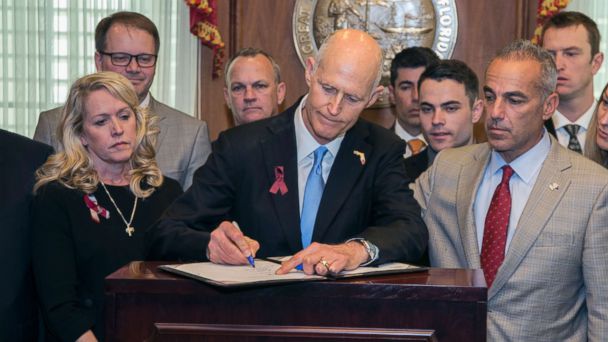 Nearly a month after 17 people were killed in a horrific Florida school shooting, the state's governor, Rick Scott, signed a gun safety bill Friday that raised the minimum age to buy a gun but also allows some teachers to be armed.

The legislation will raise the age to buy rifles to 21 from 18 and also require a three-day waiting period for long guns.

Hours after Scott signed the bill, the National Rifle Association filed a federal lawsuit claiming the law violates the Second Amendment by raising the age to buy guns.

SB 7026 also includes a controversial measure to arm some teachers and other school personnel who undergo special training sanctioned by the state.

The teacher-arming provision would allow school districts that don't want to participate to opt out. Under the guardian program, teachers and school employees who underwent law enforcement training would be able to carry handguns, provided that their districts opted in.

A number of public officials, including President Donald Trump, have argued that armed teachers would serve as a deterrent to would-be school shooters.

But according to the Tampa Bay Times, the state's largest school districts do not seem to be amenable to the idea of arming educators.

The suspect in the Parkland shooting, Nikolas Cruz, was 19 years old and allegedly used an AR-15 rifle to carry out his rampage. The shooting sparked renewed calls for gun control, including raising the age to buy rifles and banning assault weapons.

If Scott had not signed the legislation, it would have become law 15 days after it passed the house.
Report a correction or typo
Related topics:
abc newsnational
Copyright © 2021 ABC News Internet Ventures.
More Videos
From CNN Newsource affiliates
TOP STORIES