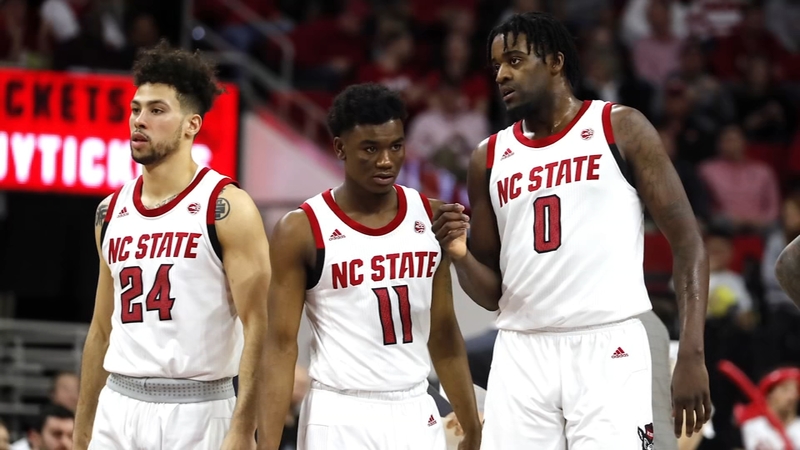 RALEIGH, N.C. (WTVD) -- Kevin Keatts will not be in costume this Halloween, but it wasn't that long ago that he was.

"I was probably trick or treating until I was 16," Keatts said Friday.

Keatts and the North Carolina State Univeristy Wolfpack have a 27 game schedule just about nailed down. It has not been easy.

"I will that scheduling has been a major challenge," Keatts said. "We may not have a schedule until the day before we play our first game but I'm hoping that that doesn't happen. I'm in a good place with scheduling. I've already realized that it's gonna be tough and it may change."

There's promise on this squad despite losing longtime starter Markell Johnson at the point. Freshmen Cam Hayes and Shakeel Moore could factor in to an optimistic season.

"Those guys are very talented freshmen and they can do a lot for us," Keatts said. "They're a little bit different than what Markell brought to the table. I think these guys bring a little bit more on the defensive end. Cam Hayes is more of a pull up guy and Shakeel Moore is just tough."

Up front, the likes of DJ Funderburk and Manny Bates should have opponents seeing ghosts. Keatts said Bates is leaps and bounds ahead of where he was last year.

"Offensively we've been able to throw the ball inside to him," Keatts said about Bates. "He's scoring over both shoulders. He is starting to rebound the basketball a lot better than he did last year."

Assuming the season starts on time next month, Keatts sounded apprehensive about how things will unfold given the country's spike in COVID-19 cases.

"We don't have any bye days or bye weeks," Keatts said. "The only thing that can happen for us is if they move the NCAA Tournament back and there's been some talks about that but that certainly hasn't happened to this point. And so if you take 14 to 21 days out of when our schedule is released, there's a chance that we can miss four or five games."

All any team can do is take care of their business. Contact tracing for COVID-19 in football is bad enough--in basketball it could sideline the whole team.

"In our practice situation we're trying as much as we can to social distance, we're trying not to have these guys around each other for more than 15 minutes at six feet, but it's a challenge doing all that other stuff."