Mother fights for life of unborn baby with deadly diagnosis 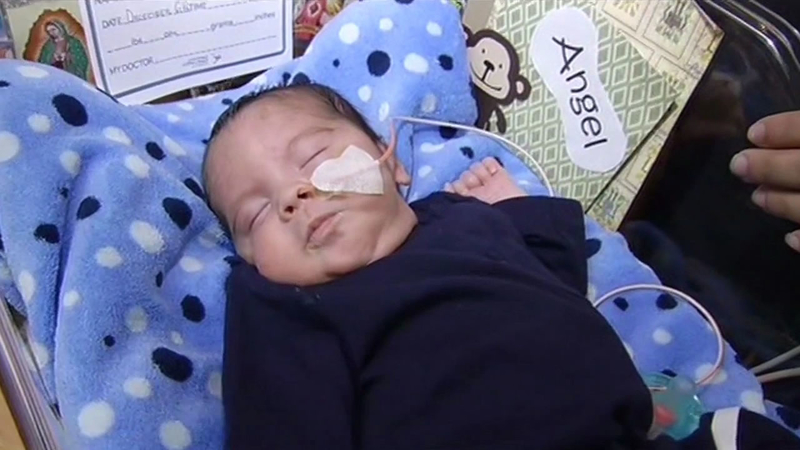 Mother fights for the life of her unborn son

PALO ALTO, Calif. -- An Oakland mom spent time with her newborn baby on Thursday, but it almost didn't happen.

It was a warm scene between Yesenia Torres and her son Angel inside the intermediate intensive care nursery at Stanford's Lucile Packard Children's Hospital. But that moment almost didn't come to be.

"Things go through your head, thinking the worst, hoping for the best," Torres said.

At 21 weeks, a routine ultrasound detected a large mass in her baby's chest. As a result, there was a recommendation from Torres' doctor to terminate the pregnancy.

"She said that kids like this didn't make it to teenage years. He probably wouldn't even make it to birth and my life would be at risk," Torres said.

In disbelief, she decided to seek a second opinion.

It led her to Dr. Jane Chueh, a maternal-fetal medicine specialist at Stanford.

Chueh knew the pregnancy was high-risk but believed the baby could be saved.

"At first, we didn't know if it was going to be a success. We did everything according to plan," she said.

That plan included a duel operating room strategy - one for the delivery and the other for the immediate removal of the mass. Both came at 34 weeks, back on December 6.

"This mass was impinging on both the heart and the lung and preventing them from functioning normally. And without its removal, it would've been fatal," Dr. Karl Sylvester said.

Torres recalled the moment after she gave birth by C-section. "As soon as he was born, they took him right into surgery, so I didn't get to see him until the next morning," she said.

Angel is on his way to recovery and will go home in the next week or two.

The mother's love was rewarded with a second chance. "I wake up and I just come to him, thanking God every day that we were here," Torres said.

Angel's face is a constant reminder that life sure is a beautiful thing.