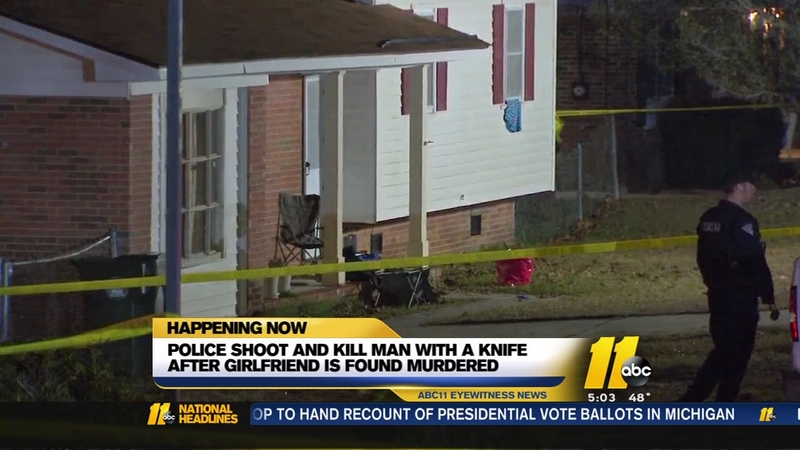 Shortly before 10 p.m., Fayetteville police officers went to a residence in the 800 block of Bedrock Drive after a child called 911 to say his mother had been stabbed by her boyfriend.

Interim Police Chief Anthony Kelly said at a news conference that police shot and killed 31-year-old Mark Anthony Hicks in the home and found a woman dead on the floor.

Kelly said officers entered the house and found Hicks standing over 37-year-old Amanda Williams lying in a pool of blood.

He said officers gave Hicks several commands to drop a knife. When he refused, officers tried to use a Taser on him and then to handcuff him.

Those efforts failed to restrain Hicks, and when he lunged at officers with the knife, they opened fire, fatally wounding him.

Kelly said a child jumped out of a window, probably 5-6 feet off the ground, and ran to a neighbor's house to call 911.

The child told the 911 dispatcher that his mother had been stabbed by her boyfriend.

"This is a tragic situation, listening to that 911 call from that child, two weeks before Christmas," Chief Kelly said.

Kelly said Hicks called 911 himself after the initial 911 call to say he had killed someone inside the house.

Kelly said body cam footage was available from the scene. At least five officers were involved, and three have been placed on administrative leave.

"I have reviewed the footage. It is graphic," Kelly said. "It is graphic on the part of the female victim in the house."

The SBI is investigating, which is standard whenever an officer is involved in a shooting.