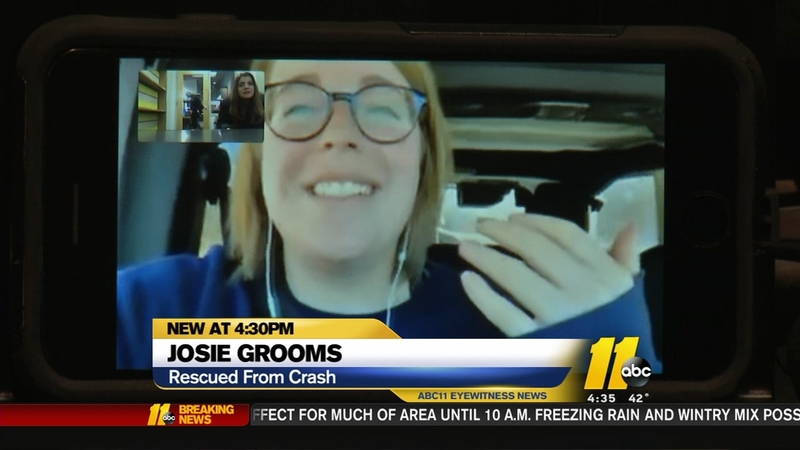 Rescued from crash, woman wants to thank NC family who saved her

A family in Ohio is asking for your help to find a mother and two sons from North Carolina that pulled a young woman out of her wrecked car on Christmas Eve.

They want to be able to thank these good Samaritans, and their social media plea is getting a huge response.

They pulled Josie Grooms out of her wrecked Chevy Spark when she was trapped in there upside down.

Grooms spoke with ABC11 via FaceTime and said her car hit a patch of black ice in Jeffersonville, Ohio on Christmas Eve, slammed into the bridge and flipped over.

That's when one of the Davis sons pulled her out and called 911.

Josie didn't see them, as her glass flew off her face, and she can't remember their first names after the shock of the accident.

The Grooms family's post on Facebook has tens of thousands of shares as folks from all over are hoping to help.

Here's what we do know about the Davis family:

"I would like them to know that I am so grateful," Josie Grooms said, "and you know it's so nice to know that there's people out there who would not only stop, not only rescue me from my flipped over vehicle, but also give me shelter in theirs."
Report a correction or typo
Related topics:
societyncohiocar crashrescuegood samaritanchristmas eveu.s. & worldgood newsfeel goodnorth carolina news
Copyright © 2022 WTVD-TV. All Rights Reserved.
TOP STORIES
Chytil scores 2, Rangers beat Hurricanes 5-2 to force Game 7
Flight cancellations kick off Memorial Day weekend
NC Lt. Governor speaks at NRA Convention following mass shooting
VP Harris tells Buffalo mourners: Stand up for what's right
Lee County Woman shot and killed, police investigating
Durham mother who founded anti-gun violence group loses second son
Woman gets 15 months in prison for punching flight attendant
Show More
Larry Stogner's honored with a landscaped garden in Durham
Troubleshooter helps Cary woman get relief over return policy
I-40 west reopens in Johnston County after 6 car crash
Police inaction moves to center of Uvalde shooting probe
Victim found dead with gunshot wound in Durham crash identified
More TOP STORIES News