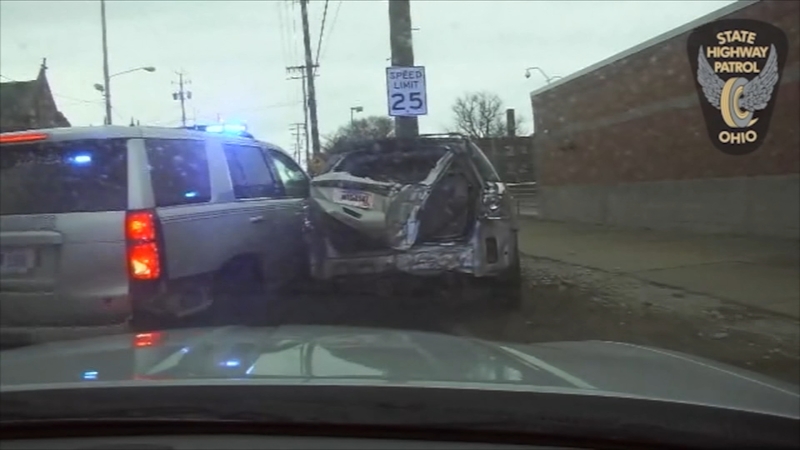 CLEVELAND, Ohio -- A woman in Ohio went to great lengths on Monday to avoid getting pulled over by troopers.

Video shows Imani Edwards smashed into multiple police cars, nearly hit several officers in the process and sped through an intersection with a red light.

WEWS-TV reports, even with the back end of her SUV smashed-in, she still didn't stop.

The reason for the chase? She says she was late for work.

Ohio State Troopers were chasing the vehicle after the woman behind the wheel fled a traffic stop. Soon, Newburgh Heights police joined in the chase.

At one point, law enforcement thought they had her boxed in on the interstate. But in dash cam video you can see the driver made a desperate and dangerous move.

Even as an officer stood right outside her driver's side window with his gun drawn, she hit the gas, nearly running down police and ramming two Newburgh Heights police cruisers during her dangerous escape.

Despite the dangerous situation, that officer does not fire his gun.

"The officers with their weapons drawn, they held very good restraint in my opinion, because their lives were at stake. She almost ran them over. That's a 2,000 pound weapon coming at you that they jumped out of the way just in the nick of time to save their own lives," said Chief John Majoy of the Newburgh Heights Police Department.

After the chase left the interstate video shows the driver tear through the residential streets of Cleveland.

Ironically, she continued to use the turn signal.

Even after police damaged that vehicle so badly, her hatchback was practically dangling, she kept right on going!

Troopers finally stopped her by forcing her onto a curb into a pole and she could not go forward anymore.

She was arrested, then had to explain herself.

When an officer asked her what she was doing, Edwards said, "I was on my way to work."

Newburgh Heights police showed WEWS-TV the damage done to those two cruisers that were rammed.

All of this mess started because of window tint and a registration violation.