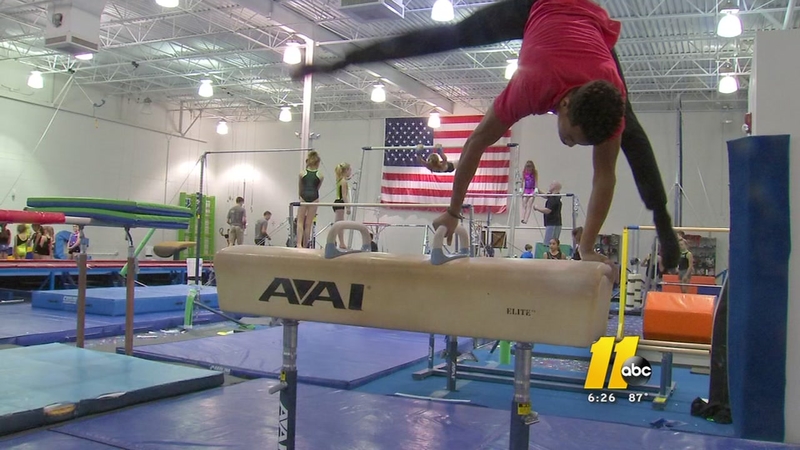 FAYETTEVILLE, North Carolina (WTVD) -- Donte' McKinney took up gymnastics at age four. Now, 12 years later, the Fayetteville teen has a chance to compete for a spot on the U.S. Junior National Team.

Five times a week McKinney makes the trek from Fayetteville to Cary to train at Triumph Gymnastics, and the commute and hours of practice are finally paying off.

The 16-year-old recently posted some of his best results yet in last month's Junior Olympic National Championships in Kissimmee, Florida.

"That time was my time to show off that I was ready to be there and show off the skills that I've been practicing for a while," McKinney said.

Don Brown has worked with McKinney at the gym for the last two years and saw all of that hard work finally come together in this meet.

"To watch him at the JO National Championships putting it all together, it was just tremendous," Brown said. "He started out on his first event, and I knew we had to hit that first event and he did. He hit it to the best of his ability, and he just kept smooth sailing all the way through the meet. It was really fun."

McKinney finished 5th in the floor routine and placed 6th overall in the 15-16 age group, helping him qualify for his biggest stage yet - the P&G Championships held in Anaheim, California in August.

"I can't believe that we're actually going to this huge meet that I didn't even think I would dream of going to when I was little," McKinney said. "I'm going to be competing with bigger people like Olympians like Jake Dalton and Sam Mikulak."

"The U.S. Championships is where all the top athletes in the sport will be competing to earn their spots on the National team," Brown said. "All of the men's and women's athletes who trained and competed for the United States in Rio in the Olympics, they went through this meet."

To earn a spot on the U.S. Junior National team, Donte will need to finish in the top three, and as one of just two athletes representing North Carolina, he aims to make the state proud.

"Representing the state is truly amazing because some of these kids really look up to me," McKinney said. "They see the things I do at the gym, and they want to be like me."

The next two months of training will be in high-gear for the young gymnast, but no matter the outcome in August, his future in this sport still looks even brighter.

"I think the sky's the limit for Donte," Brown said, "He has tremendous ability. I don't see many athletes that have his capability, and he's had college coaches already with their eyes open seeing him."