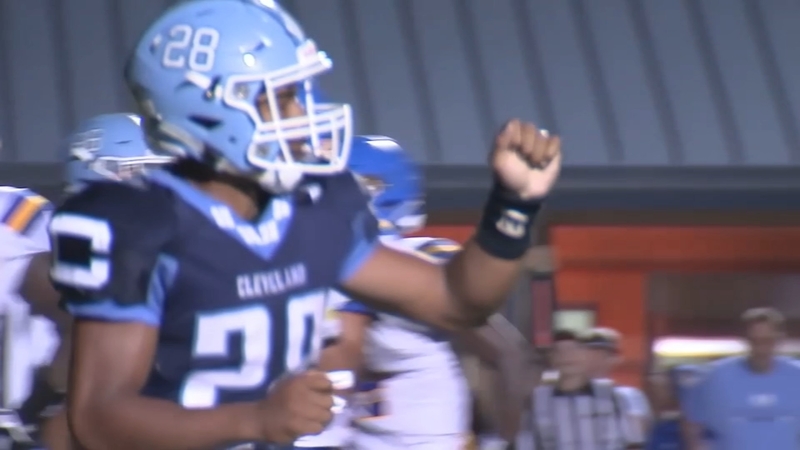 CLAYTON, N.C. (WTVD) -- Talents the likes of Omarion Hampton don't come along very often - almost 3,000 yards of offense and 39 TDs as a sophomore running back for Cleveland High School. When you do that, you get attention. As of September 1, he was eligible to start receiving official recruiting pitches.

"His mom reached out to me and was like 'Wow! This is a lot! Can we wait to call them back until school's over?'" laughed Cleveland head football coach Scott Riley.

A national-level recruit - Omarion has thus far only visited in-state schools in person aside from one trip see South Carolina play. All of that was before the virus arrived. Since then, he and the hordes of hopeful college coaches do all their relationship-building online.

"It's been different than what I've been doing." Hampton told ABC11, "I usually FaceTime different coaches and they hit me up on Twitter and stuff like that."

Riley said schools are adapting as best they can to the circumstance.

"A lot of schools have done some interesting stuff," Riley said. "They're sending him 360-degree tours of campus and those kinds of things."

It has obvious limitations vs. in-person meetings, but Omarion feels like it's still effective enough.

"I feel like I can still get to know them with FaceTime and stuff like that," he said. "Since it's actually face to face (digitally), it's basically the same thing."

Riley knows the struggle well, as a teacher. "I feel like we can build a pretty good rapport remotely, but it's definitely not as good as face to face."

As a 2022 recruit, Omarion still has time on his side before making any decisions. Actually stepping foot on various campuses will hopefully be a part of that process. Until then he's working out, keeping up with class work and eagerly anticipating February football.