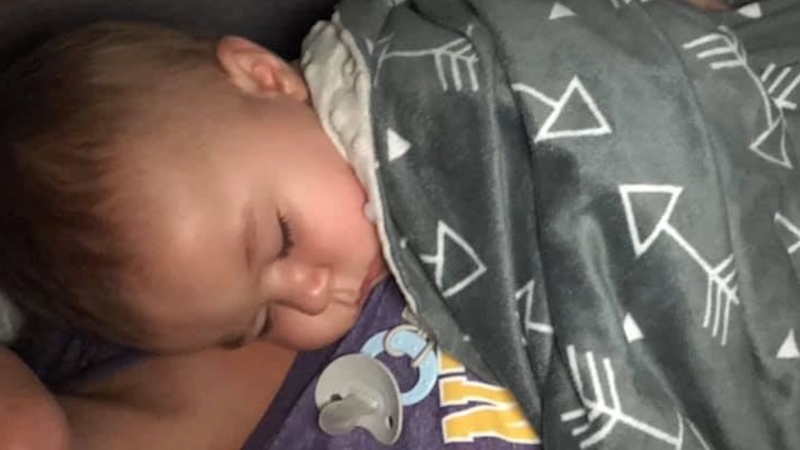 FAYETTEVILLE, N.C. (WTVD) -- A Fayetteville mother is accusing a local fitness center of neglect after her eight month old suffered a fractured skull.

At eight months old, Finn is quite the talker. But he couldn't communicate how he got a serious head injury.

"I woke him up at 12:30 and on this side his head was really flat the way that it was. I felt it and it was really soft and squishy," said Allison Dodd.

Early Tuesday morning, Allison Dodd said she went to work out at Omni Fitness in Fayetteville.

The military mom of two chose the location because it was close to her 3-year-old's preschool.

Dodd said she left Finn at the facility's drop-in daycare and when she picked up him he was fine.

But a little after noon, Dodd said she rushed him to the hospital while her husband made his way home from Afghanistan.

"So when they did the x-ray and CAT scan they found that it was blood underneath it and that it was a skull fracture," said Dodd.

So how did this happen? Dodd may never know because the daycare facility doesn't have surveillance cameras.

"Since there are no cameras in there CPS had to be called. And when CPS was called they told me pretty much I had to be under supervision until further notice so I couldn't be alone with my kids," said Dodd.

Dodd said Child Protective Services did clear Finn of any abuse but she's blaming Omni Fitness for neglect.
"Terrible so it's already very frustrating and sad that he had a skull fracture and I don't know how it happened because I trusted people to keep him safe. It's not like I dropped him off at someone's house that I didn't know. I was literally 50 feet away," said Dodd

ABC11 learned that drop-in daycare facilities are not regulated by the state.

"All children need to be protected wherever they go," said Dodd.

Omni Fitness declined to speak with ABC11 on camera, instead it posted its response to Facebook.