Woman charged in connection with fatal I-540 crash 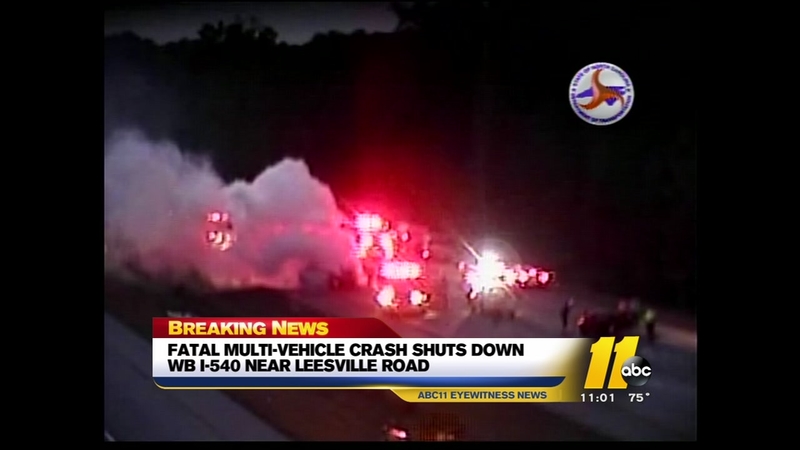 Fatal wreck shuts down WB I-540

RALEIGH (WTVD) -- A driver is facing charges in connection with an accident that killed a woman along westbound Interstate 540 Monday night.

It happened just before 8:30 p.m. following another crash that shutdown the highway near Leesville Road late Monday afternoon.

According to the NC Highway Patrol, a 2003 Chrysler van, driven by Otis Lyons of Durham, was stopped on I-540 due to traffic from the earlier accident. Behind Lyon's van was Dolores Wakefield of Pittsboro in her 2010 Chevrolet car.

Authorities said a 2015 Chevrolet car going in the same direction, failed to slow down and struck Wakefield's car from behind, pushing it into Lyons' van. Wakefield died at the scene.

The driver of the 2015 Chevrolet car, Brittaney Lowe-McGregor of Raleigh, was taken to WakeMed with serious injuries. It is unclear if Lyons was injured.

Investigators charged Lowe-McGregor with misdemeanor death by vehicle and failure to reduce speed.

DOT cams showed traffic backed up for miles as crews worked on the scene earlier in the day, which involved a jack-knifed tractor trailer, troopers said.
EMBED More News Videos

A trooper was directing traffic to the exit ramp

The interstate reopened just before midnight.