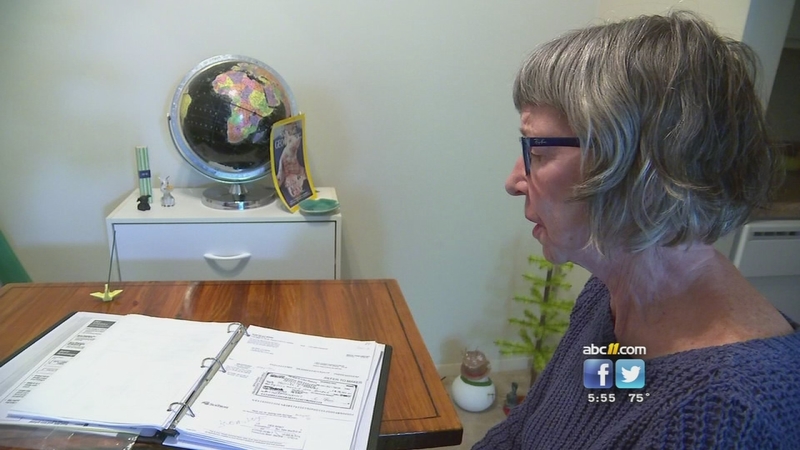 CHAPEL HILL, N.C. (WTVD) -- Online dating sites are supposed to be a place to find love and friendships. However, this was not the case for a local woman searching for a friend on the internet.

Melinda Flowers wanted someone to talk to, so she joined an online dating site and it wasn't too long before someone came along to chat with her.

The man claiming to be a soldier went by the name of Larkin. He sent her pictures of himself in uniform, and the two grew really close over a few weeks.

"He called me on the phone three times and we texted every day and got to be friends, he called me mom, I called him son," Flowers said. "It was fun; it was something to do besides crossword puzzles."

It wasn't long before Larkin started asking for favors, but he didn't ask for money like most scammers we've warned you about. Instead, he sent money to Flowers.

"A personal check that looked like yours and mine," Flowers said. "He wanted me to forward some money to his lawyer because it was so hard for him to get money in the service in Afghanistan and I said okay."

Flowers got the check from Larkin for $18,900, and deposited it into her account at SunTrust.

"So they held it for ten days, called me up and said, 'oh the check's fine, we had it confirmed by U.S. Bank,'" Flowers said.

She said since the bank told her that the check was good, she did what Larkin asked and wired the money to his two lawyers. But something unexpected happened shortly after.

"So then I got a call a day or two after that, after I deposited the money into the accounts that, oops, the money was not there after all," she said. "And so you now owe us $18,900."

Flowers now had to pay back the $18,900. She dug into her investments and took out a loan to pay the bank back, but then got a letter from SunTrust informing her that she can no longer bank with them and that her account was closed.

Hugh Suhr with SunTrust Corporate Communications provided us with this statement:

We're continuing to review the matter and while we're not at liberty to discuss a specific client relationship, I can provide some general observations.

We make funds available on deposits for account holders' use based upon Federal guidelines. In some instances, funds may be available for use but the item has not finished being run through the clearinghouse system and therefore has not "cleared". Federal guidelines also are in place on when and how banks clear deposited items between institutions. We have other options we can look into on behalf of a client if a transaction might have taken too long to process by another bank in the transaction and we are certainly looking into that in this particular instance.

Bottom line on issues of this nature is that an individual is ultimately responsible for items deposited into their account. Therefore they should know and trust who they are doing business with. If something sounds too good to be true it probably is.

We also offer information at our website on fraud prevention located at the following links including some of the common scams that are used: Scam Protection from SunTrust and SCAMS 101

As for Larkin, we did a quick Google search and found the same pictures he sent to Flowers were also reportedly used on numerous scams involving dating site. Also it's likely those pictures were stolen off social media sites.

As for Flowers she just wants to try to protect others from her nightmare.

The best advice, whether someone is asking you to send money or cash a check for them and send money back, it's a huge red flag.

Even if the check does clear initially, the bank customer is ultimately responsible for the items deposited into their accounts.