I-Team: HealthCare.gov signups down; is a big change to blame? 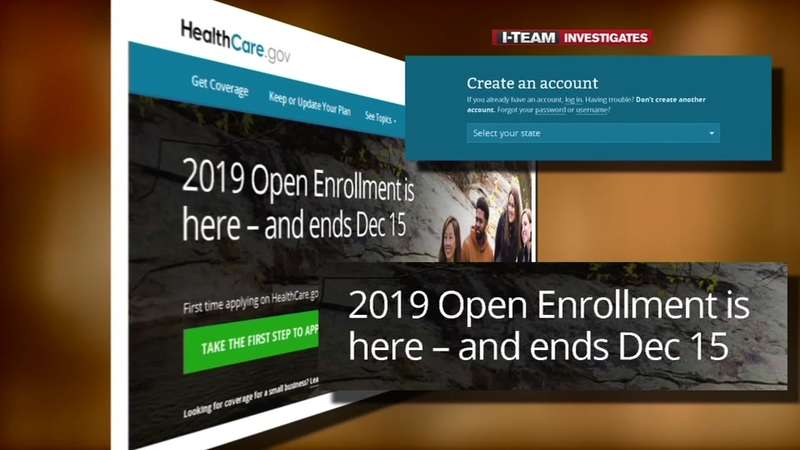 RALEIGH, N.C. (WTVD) -- Health officials and advocates are making a final push for Open Enrollment, the time for millions of Americans to sign up for health insurance on the HealthCare.gov marketplace for 2019.

The marketplace, set up by the Affordable Care Act, is sometimes referred to as "ObamaCare," and it has been popular among North Carolinians in recent years. Still, there's a big change for next year that may be the reason enrollment is down: the end of the individual mandate, the controversial requirement for every American to buy insurance.

"Not buying insurance is a risk," Julie Henry, spokeswoman for the North Carolina Healthcare Association, told ABC11. "If someone goes without health insurance then the chances of them having preventative care are lower, the chances they're getting chronic diseases managed are lower, and that means they go to the emergency department for care."

The rationale behind the mandate was that if more Americans buy insurance - especially young and healthy Americans - the increasing supply of policies will ultimately lower the cost of premiums because fewer people would be needing expensive care, including the emergency. Opponents, however, derided the mandate as a violation of civil liberties and an individual's right to choose (the mandate was enforced by a tax of either $695 or 2.5 percent of gross income, which is greater).

The mandate was repealed as part of the tax overhaul passed by Congress in 2017 and signed by President Donald Trump.

Data provided by the federal government shows North Carolina ranks among the top states with the number of residents signing up for health care on HealthCare.gov, more than 519,000 in 2018, but down from the more than 560,000 in 2017. Next year's drop could be much sharper - up to 15 percent by some estimates - in part because people will not face penalties for not purchasing health insurance.

"It's just like home insurance. You may not use it, but they do when you use it, it will help you. That's how I look at it."

Open Enrollment for health coverage at HealthCare.gov started November 1st and ends December 15. According to a poll from the Kaiser Family Foundation, almost 4 out of 5 people who are uninsured or buy their own insurance either don't know the deadline is around the corner or thought it was a different day or refused to answer.

"Quite simply, North Carolinians are not getting the vital information they need to sign up for comprehensive coverage at HealthCare.gov," said Joshua Peck, former CMS official and co-founder of Get America Covered. "There are multiple factors that have caused a decline in enrollment this year, but all of these factors have a common cause... the Trump administration. Thousands of North Carolinians are at risk of not having health care coverage in 2019 because they just don't know that now is the time to sign up for coverage."

Other changes for 2019 include major shifts in insurance carriers and their networks, affecting an estimated 40,000 people in Wake County and Durham County, including the arrival of a new provider to the ACA exchange on HealthCare.gov. The new plan, known as Ambetter of North Carolina, will be the only exchange plan available that offers in-network benefits for both Duke and WakeMed systems. It will be underwritten by Centene, a Missouri-based company that offers exchange plans in 16 states.

Still, some policy holders told ABC11 that they are frustrated by the lack of choice on HealthCare.gov.

"I feel very underserved by the current situation," Donna Tomkinson, a Raleigh resident, told ABC11. "It is tough to be just outside the income limit for premium subsidies. It is bad enough that my health premiums are higher than mortgage/rent payment but I have to cash out retirement savings each year just to pay for my health premiums. Then, I pay taxes on that money, and it also increases my income for the next year! A 'Catch-22.'"

The organization Get America Covered said 8 in 10 people qualify for financial help to make their monthly premiums more affordable. In fact, 80 percent of Americans can find a plan that costs less than $75 each month.