Operator of boat involved in accident at Falls Lake was impaired, officials say 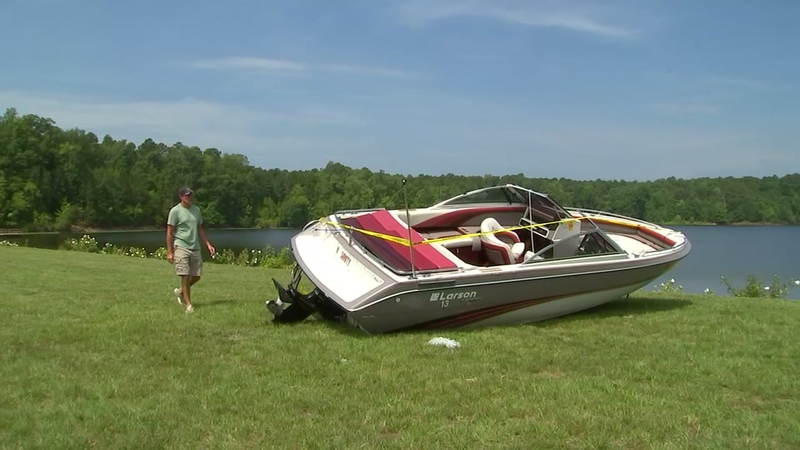 Boat owner to be charged after Falls Lake accident

CREEDMOOR, N.C. (WTVD) -- Authorities say the person operating a boat that was involved in an accident at Falls Lake Wednesday was impaired.

Jay Blanchfield will be charged with careless and reckless operation of a motor vessel and operating a vessel while impaired, according to the N.C. Wildlife Resources Commission.

The incident happened about 9:20 p.m. Wednesday night at Falls Lake.

The operator of this boat that hit the dam that separates falls lake and beaver dam lake will be charged according to @NCWildlife. He will be charged with careless and reckless operation of a motor vessel and operating a vessel while impaired. #ABC11 pic.twitter.com/30yb2N9mIB

Wildlife officials told ABC11 that a boat being operated by Blanchfield, of Raleigh, struck the dam that separates Falls Lake from Beaver Dam Lake.

A kayaker witnessed the incident and called 911.

"He hit the rocks right here and just basically launched up through there, stopped right there, motor is still full throttle," said the kayaker, who didn't want to be identified. "I told the guy I was fishing with to paddle us over and I'll call 911.

In addition the Blanchfield, who owns the boat, there were two passengers aboard, a husband and wife.

Wildlife officials said the boat was traveling about 30 mph when it struck the side of the dam.

Seeing the boat in daylight for the first time from Wednesday night accident. Somehow it wound up on top of the dam that separates falls lake and beaver dam lake. We just spoke to the owners and they are bruised but okay. #ABC11 pic.twitter.com/aChxE1qD7t

When it struck the rocks, it propelled the boat up the concrete side and launched the boat three-fourths of the way across the side of the dam. The boat came to rest 40 yards from the water.

"It's surreal at first when you see it happen," the kayaker added. "We were shocked that that even happened -- I mean what are they thinking."

Once at the hospital, Blanchfield, was charged with careless and reckless operation of a motor vessel and operating a vessel while impaired. Both of those are Class 2 Misdemeanors. The fines and penalties for this type of incident are the same for driving while impaired.

"You could run over somebody. There's skiers and sometimes the skiers can fall off, you've got to pay attention to where you're going and definitely keep your eyes open," said Jason Nichols, of Durham, a frequent boater on Falls Lake. "This is a first for me. I saw it on the news this morning and I had to come out here and check it out. Just pay attention to what you're doing - they were obviously going too fast when they were coming out here."

Wildlife officials stressed to ABC11 the importance of having navigational lights on at night.