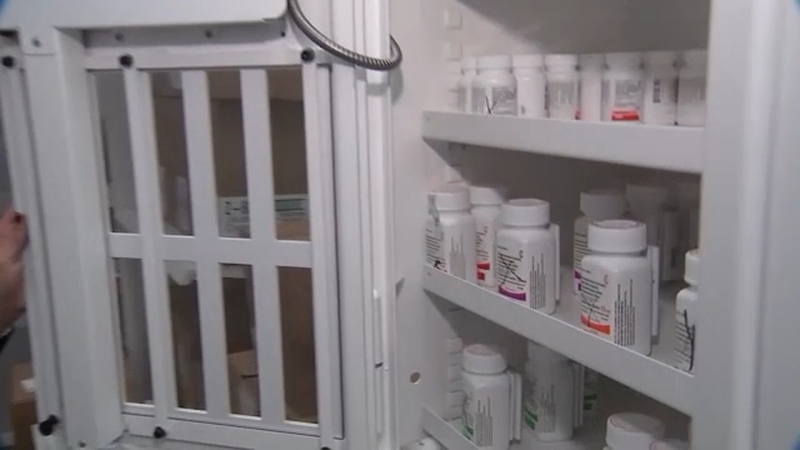 "Whenever a gun's involved it can become very dangerous very quickly for everyone who's in the immediate area," said CVS customer Natasha Moore of Raleigh as she left the company's store on Fayetteville Street downtown.

That store and all of the CVS pharmacies in North Carolina now have bright red signs on their front doors that read, "WARNING TIME-DELAY PHARMACY SAFES IN USE, monitored by 24 hour surveillance, emergency alarm systems, for safety and security"

According to CVS that means that even though a pharmacist has a code to open the narcotics safe, it doesn't open immediately.

"Pharmacy robbers, they really want to get in and out of the pharmacy as quickly as possible. And when you have to wait to have access that becomes a deterrent that has decreased pharmacy robberies in all of the markets that we've installed these," Brian Bache the region director for CVS in North Carolina told ABC by phone from Charlotte today.

Bache says when the safes were installed in the Indianapolis market it cut robberies by 70%.

CVS customer Natasha Moore is one of those not directly affected by the opioid epidemic and said until today she didn't realize it could have an impact on her life just because she goes to the drug store.

"I actually didn't know it was this bad. That really saddens me. But I'm just really excited that CVS is doing what they can to make it safer for everybody," she said.
Report a correction or typo
Related topics:
health & fitnessraleighncrobberycvsraleigh newsopioids
Copyright © 2021 WTVD-TV. All Rights Reserved.
OPIOIDS
'Dopesick' cast discusses 'heartbreaking' history of painkillers
Mom's billboard warns others after daughter dies due to fentanyl
North Carolina to receive $750 million as part of opioid settlement
NC opioid deaths up nearly 35 percent in 2020
TOP STORIES
Police find items belonging to Brian Laundrie, apparent human remains
NC State student dies after being hit by car near campus
Gas prices rising nationally, in Triangle: Here's why
'I still have questions:' Families mourn teens killed in wreck
LATEST: US OKs mix-and-match booster shots
White House details plan to roll out COVID vaccines for younger kids
Show More
Enrollment proposal information sessions begin for new WCPSS schools
Americans arrested for trying to board flight in Switzerland
These grocery items are about to get more expensive
Free college proposal likely to be dropped from Biden's spending plan
Husband charged with killing Maya Millete, who vanished in January
More TOP STORIES News