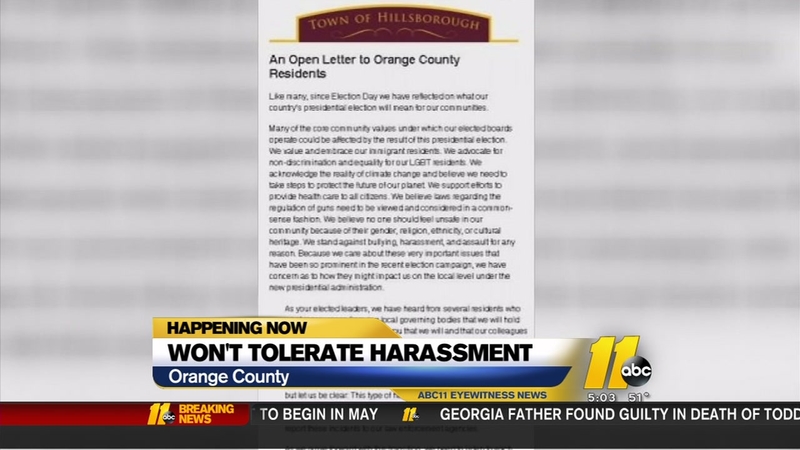 ORANGE COUNTY, NC (WTVD) -- Tom Stevens, the mayor of Hillsborough, told ABC11 that city and county leadership published an open letter to the community in response to some neighbors' concerns of being targeted for their sexual identity, immigration status, religion, and skin color.

The letter reads in part: "Like many, since Election Day we have reflected on what our country's presidential election will mean for our communities."

Stevens said the letter is an effort to remind residents that officials do not condone bullying. Officials say they want the community to report harassment to local authorities.

But some critics think the letter takes a political turn. Part of the note also talks about the need for gun regulations and "healthcare for all citizens."

ABC11 spoke with Daniel Ashley, the local chairman of the Orange County Republican Party by phone Monday. Ashley said the letter is a form of political correctness.

In a public response sent out Tuesday, Ashley went further, labeling the letter a "smorgasbord of politically correct BS".

Mayor Stevens co-wrote the letter with other city and county leaders. Stevens is a Democrat, but serves a nonpartisan role as mayor. He disagrees with the criticism.

"Not every single person will believe this and certainly some people will take this as a political statement -- that's fine," Stevens said. "The intent is to reassure our constituents as a whole and do our best to bring people together. Obviously not everyone is going to agree."

ABC11 checked in with local law enforcement about any reports of hate crimes connected to the elections. Carrboro Police said they are looking into a claim that a Hispanic person was harassed.