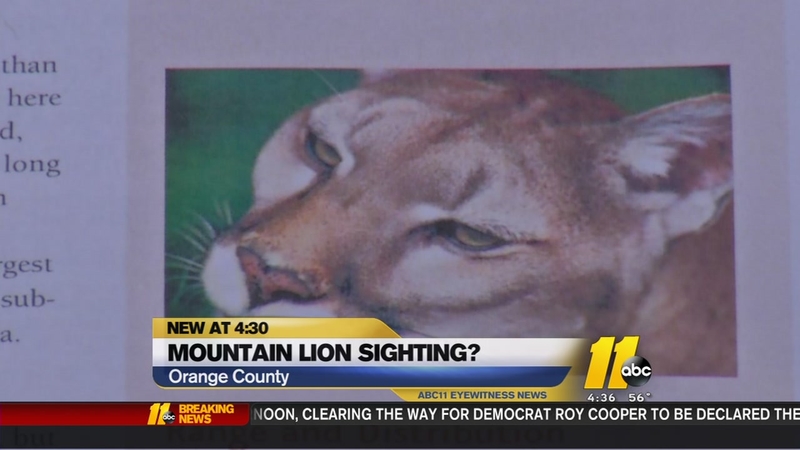 Mountain Lions in the Triangle?

A mountain lion in the Triangle? Some residents near the Durham-Chapel Hill border think they've spotted the big cat. Wildlife officials aren't so sure that's the case.

Neighbors along NC 54 are warning each other about possible sightings, but according to state biologist Jessie Birckhead, it's highly unlikely there's a mountain lion roaming the area.

"Mountain lions have been extinct in the wild in North Carolina since 1900, and what that means is that we don't have populations of mountain lions here," Birckhead said. "They are not breeding here. They are not occurring in our state."

And they're not native to nearby lands of neighboring states either. While Durham and Orange County law enforcement agencies haven't had any reports of wildcats, a Carrboro police officer reports having seen a bobcat earlier last month.

Birckhead said that is much more likely.

"They occur in all 100 counties," he said of the bobcats. They are not something you commonly see, because they are very shy but they're certainly one that occurs all over the state."

So what should you do if you see a bobcat in the wild?

"Seeing a bobcat is really special; something that you should be excited about, not something to be too afraid of," Birckhead said. "Bobcats don't see people as prey, but we always recommend some common sense for folks -- keeping pets supervised when you're outdoors, not leaving pet food outside.

According to NC Wildlife, there are more lightly colored bobcats, and they say that this might be what folks may have seen and mistaken for a mountain lion.

But if you have any photos or videos of any mysterious sightings of large cats or photos of tracks, NC Wildlife would like you to send that over to them.