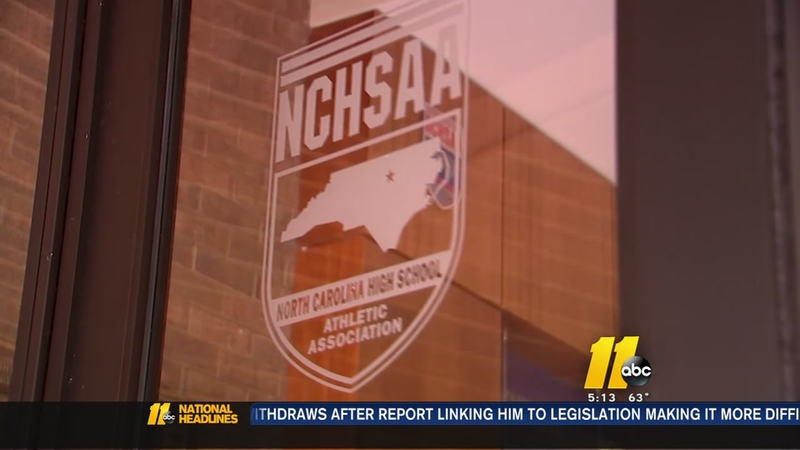 How safe is high school football?

HILLSBOROUGH, North Carolina (WTVD) -- Orange High School running back Marvante Beasley lay motionless on the football field Friday night. The senior student-athlete was injured on a routine play after his helmet collided with another player.

OHS players and athletes from opposing Hillside High School joined hands to pray for Beasley as he was carted off the field.

"My body just went limp," Beasley told ABC11. "I really couldn't feel anything at all."

Also included in prayer was 14-year-old OHS junior varsity athlete Thys Oldenburg. He was severely injured in Thursday evening's game and was rushed to Duke University Hospital where he remains in a drug-induced coma.

"(When I got injured) I was thinking I wouldn't be able to play, it started affecting me," Beasley recalled. "And I started tearing up when I started thinking about my future and possibly not being able to play football anymore. It started to hurt me."

The injuries on successive nights to Oldenburg and Beasley prompted concern among parents and reignited the debate about high school football safety.

"I do see that we will continue the conversation about football," said Que Tucker, commissioner of the North Carolina High School Athletic Association.

Tucker said every high school coach must take a safety course offered by the NCHSAA and must be in possession of a completion certificate prior to the first day of practice.

Many high school athletes have dreams of playing at the collegiate level and possibly the NFL. That passion can lead to some athletes playing more aggressively than others.

"It's my hope that we don't have any young people out there trying to be unsafe so they can play on Saturdays and Sundays," Tucker said. "I think that just involved in play there are going to be those times that injuries happen that defer a dream, delay a dream, or cause a dream to not really come into fruition."

"I think the data we're showing isn't that football isn't dangerous, It's people sustain injuries at varying magnitudes and severity," Mihalik said. "And there are things the athlete can do to still have the big hit and keep those head impact forces low."

Mihalik agrees the "textbook tackle" is the safest way to tackle even as new data is introduced.

"I say to the parent who's concerned about their child playing football, that their child shouldn't play football," Mihalik continued. "What I can say is in my mind, football today is safer than it's ever been just with the awareness related to concussions ... we know more about the injury today than we've ever known. So if there was ever a time to play football, now is it."

Talk has been made in recent years whether high schools will still offer football as a sanctioned sport.

"When they kick that ball off and those players take off running towards the one who catches that ball, there's going to be some kind of collision," Tucker said. "Is that the best way to start a game? I don't know."

Tucker said her organization, coaches, players, and parents will continue the conversation as more is learned.

"Will it be decommissioned? I don't know," she added. "But I hope not."