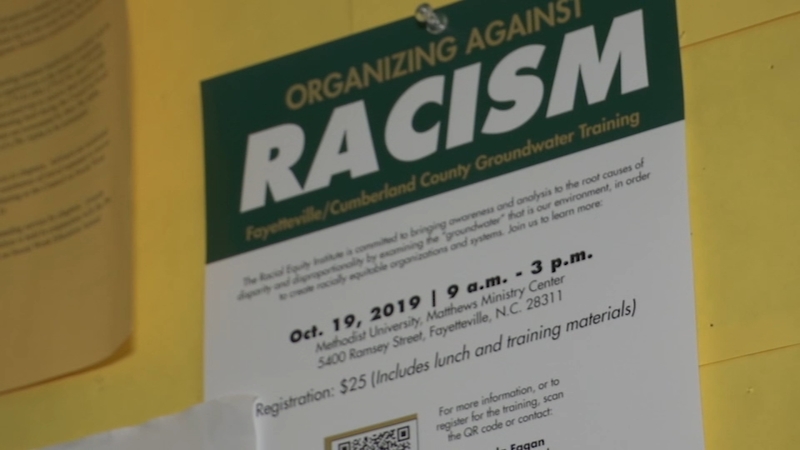 FAYETTEVILLE, N.C. (WTVD) -- A workshop that looks to address the many forms of racism will make its way to Methodist University on Saturday.

"Organizing Against Racism Groundwater Training" is designed to address the "often subtle, yet harmful patterns of behavior that lead to disparity and disproportionality".

Dr. Carla Fagan, an associate professor at Methodist University, is one of the organizers of the event.

@MethodistU is holding a racism awareness event all day Saturday that's open to the public. They intend to have tough conversations about the many forms of racism in modern day. Hear why organizers believe this is a step in the right direction at 10/11 on @ABC11_WTVD. pic.twitter.com/LwLaNMuDQM

Fagan recalls the era of segregation and discrimination in North Carolina.

"Go to the back of the bus at the Mason-Dixon line. Having to drink at the colored fountain, sitting in the colored bus station," Fagan said.

Back in the present day, Fagan said there's been major progress but a lot more needs to be done.

The tough discussions on Saturday will include the blatant signs of racism that we still see today.

A most recent example is the defacing of a cross at the historically black Evans Metropolitan AME Zion Church in Fayetteville.

A 33-year-old man was charged with ethnic intimidation after police said "KKK you next" was sprayed onto the monument located by the church at 301 N Cool Spring Street on Sept. 30.

The other main topic is the more reserved racism that is shown in how individuals treat people of color.

"Implicit bias. This is a part of you because this is how you were raised, and no one ever brought it to your attention," Fagan said.

Fagan hopes people are able to attend the event and get out of their comfort zones with the discussions.

"It's not about who you are or what you do. It really is about the color of your skin," Fagan added.

The professor knows this is not the end all solution but hopes instilling historical context and bringing awareness will move everyone in the right direction.

"I believe if we put what's going on today in context and begin to understand, we can move forward," Fagan said.

Local law enforcement, members of the district attorney's office and other city and county officials will be in attendance to discuss bias in those areas of government.

The workshop is from 9 a.m. to 3 p.m. in the Matthews Ministry Center on the MU campus.

The event is open to the public and requires a $25 registration fee.