Our America Will Be, a Personal Essay by Tamala Edwards

We live every day with the difficult legacies of the past. But history does not have to be destiny.
WPVI
By Tamala Edwards 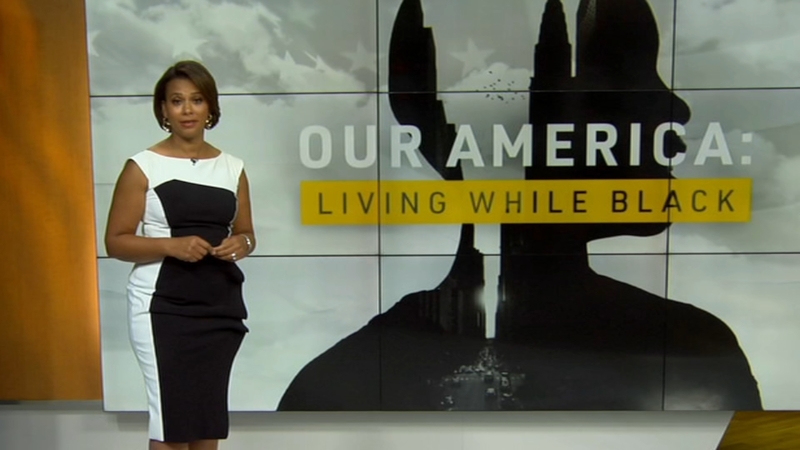 Our America Will Be, a personal essay by Tamala Edwards

I say it plain/America never was America to me,
And yet I swear this oath -- America will be!
-Langston Hughes

For months now we here at ABC have wondered how to get our arms and hearts, our brains and souls around this moment. From the streets to the suburbs, from city blocks to tiny town squares, the pain has been real, sparked by a man on a Midwestern pavement, his life ebbing away over eight minutes and forty-six seconds, calling for his mother under a knee that would not move. Since then Americans have reacted in hurt and horror, the taste of ash on our tongues, as yet another protest steps off or video hits social media or an election cleaves us further in two.

Here we've been fascinated by a quiet refrain, repeated by so many: "I didn't know." Americans have upended the bestseller list, devouring books on race. Texts and emails have gone out across the racial transom, with a simple plaintive plea: "Can we talk?" People have sat with their own pasts, recalling, sometimes with shame, choices made and things said, before looking, chastened, into their children's faces. What are we teaching them and what are we leaving them? That is, unless of course, you are Black. In that case, the ugly and the deadly are familiar.

But that's it, isn't it: "I didn't know." What if we helped people know more, to look into the darker hued faces of their fellow Americans and really see? What if people could see the hidden history, the decisions that make being Black in America harder, and understand this is more than just the end result of choice and accident? And, finally, what if people knew they were powerful, that impotence or ragged, rank fear were not their only options?

For this project to have the greatest heft, I knew it needed to be pinned to facts, to history. But where to begin? Do I start with 20 enslaved souls on the White Lion in 1619? What about Reconstruction and Jim Crow? Then I realized that perhaps the most powerful place to start was in more current times, with policies we all know, like Social Security. It was crafted to protect the American elderly from poverty. What most of us don't know is that the bill purposely excluded agrarian workers and domestics-- in other words, black people. Now I know why my grandpa Felix and grandma Maggie, my grandpa Eldridge and grandma Josephine all went to their graves destitute, relying on their children, even as they rubbed their arthritic hands, warped by lifetimes of menial labor, till the end.

Then there was the GI Bill, with low interest home loans and scholarships that sent a generation soaring into the middle class. Those degrees meant better jobs. The homes were collateral and an inheritance to pass down. But banks refused to loan to Black GIs and white colleges barred the door.

In fact, housing in particular was a hellish crucible for Blacks. The Federal Housing Authority underwrote mortgages for whites, but excluded Blacks. So whites could seize a suburban dream with a percentage down. But Blacks had to save it up entirely or turn to loan sharks, all for shabbier, smaller homes and lesser services, often on polluted, toxic land. Freeways and bridges were designed to wall them in. Even once Blacks began to get around the redlining and racial covenants, it was often a bitter homecoming, white mobs on their lawns cursing, heaving bricks, and threatening more violence.

So I should consider myself lucky. My parents were among the first Blacks to buy in Riverside Terrace in Houston. We faced no nastiness. Instead we watched the quiet exodus of white neighbors who ran from us, scared of people like my dad, a banker, and my mother, a stay at home mom.

All of this, not a trick of fate, is why "those people" live on "that side" of town. The average black family has only five percent of the wealth of white America. Five percent. This is life on the margin, no cushion, little inheritance. We may live next to you sometimes now, but it's so much harder for us to live like you. Have some made it out, even thrived? Yes, but please understand: A rose can grow in concrete, but don't confuse it for a garden.

And so we all exist with this, limping along with that perverse legacy. The stories you see here are meant to show you what that has meant and where it has left us. There are pieces that will show you the hardship. There are pieces that will show you the endurance. There is Black strife, but there is also Black joy. And here's the thing: We don't have to stay here. We get to make choices too. We can be the person in the office who asks why on those loans and mortgages. We can ask Chief Acevedo of Houston and others like him to help us remake our police departments into something better for the force and community alike. We can insist that there be regulations and training, so all pregnant mothers get the same concern, no matter what side of town. We can tell a child, even one in a limited circumstance, he has limitless potential, and build a world where that is true.

Here's to the possibilities of a new world, for my children, your children, all of whom are OUR children. Here's to that new America Langston Hughes wrote about. We hope you use these pieces to reimagine the map and make a compass. It's a journey long overdue. Let's go, together.
Report a correction or typo
Related topics:
societyour americablack lives mattereducationschoolshousingracismpoliticsu.s. & worldrace in americapolicerace and culture
Copyright © 2022 WPVI-TV. All Rights Reserved.
OUR AMERICA
Durham teacher raises more than $100,000 in foodraiser for students
Our America: Accomplices - The Story of Ady Barkan | Full Episode
Our America HBCU Experience: Livingstone College
How Indigenous spoken word artist honors heritage through storytelling
TOP STORIES
Snow, sleet, freezing rain expected again this week
NC legislature votes to further delay primaries until June 7
Third arrest made in Black Friday shooting at Streets at Southpoint
Daniel Turcios shot 5 times after crash on I-440, RPD reports
'He was special': Durham friends remember Andre Leon Talley
'We can't get any more': Store struggles to restock shelves
Victim in fatal I-85 crash was just 3 months old
Show More
19-year-old charged in wreck that left 2 Marines dead
Earnhardt Jr. to be inducted into NASCAR Hall of Fame
Raleigh man feels lucky to be alive after bullet found above his bed
2-year-old accidentally shot himself in Harnett County
Biden, 1 year in, says nation weary from COVID but in a better place
More TOP STORIES News