How climate change is reshaping communities | Our America: Climate of Hope 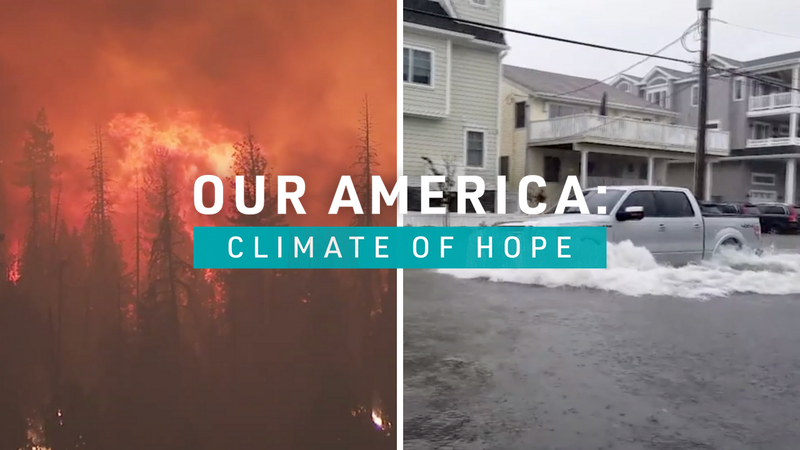 In 2020, the United States experienced more billion-dollar climate disasters than at any time in its history, including the worst wildfire season on record and mudslides over wildfire-scarred hills that collapsed part of the historic Highway 1 near Big Sur on California's coast.

We saw extreme, historic cold and ice in Texas that left millions of people literally in the dark, without power, heat and even clean water. Our cities and communities are living with floods and fire, air pollution and plastic waste. And it's impacting low income and communities of color the most.

And yet, there are signs of hope.

When the pandemic kept us off the roads, air pollution as tracked by NASA plummeted. With fewer people in our national forests, wildlife roamed freely at Yellowstone National Park. And some of the biggest corporations committed to a renewable future.

In this installment of "Our America: Climate of Hope," ABC Owned Television Stations' meteorologists across the country reflect on the changes they have seen in their communities because of extreme weather. With the help of National Geographic projections, they look ahead to what their cities could look like in 2070 and share how they have changed their lives because of climate change.

Watch "Our America: Climate of Hope," on your local ABC station, wherever you stream: Fire TV, Android TV, Apple TV and Roku beginning April 16 and on Hulu beginning April 17.
Report a correction or typo
Related topics:
our americanatgeoweatheru.s. & worldclimate changeclimate of hope
Copyright © 2021 WTVD-TV. All Rights Reserved.
CLIMATE OF HOPE
Our America: Climate of Hope
How the jar method can help preserve your food and also save you money
Food innovation reduces reliance on animals and water
Zero-Waste Challenge: Going waste-free for one week
TOP STORIES
CDC reverses course on indoor masks in some parts of US
Some Wake parents OK with masks as long as kids can be in class
Mental health experts applaud Biles' tough decision at Tokyo Games
Why this Haitian restaurant relocated from Brooklyn to Edgecombe Co.
LATEST: Cooper to 'review changes to CDC guidance'
800K COVID-19 vaccine doses in NC could expire by end of August
Show More
As COVID-19 cases surge, nervous parents prepare for school year
1 dead in movie theater shooting during showing of 'The Forever Purge'
495 new hepatitis A cases reported in NC this year
4-year-old dies after report of drowning in Harnett County
Mother, boyfriend charged after 5-year-old's death in Aberdeen
More TOP STORIES News