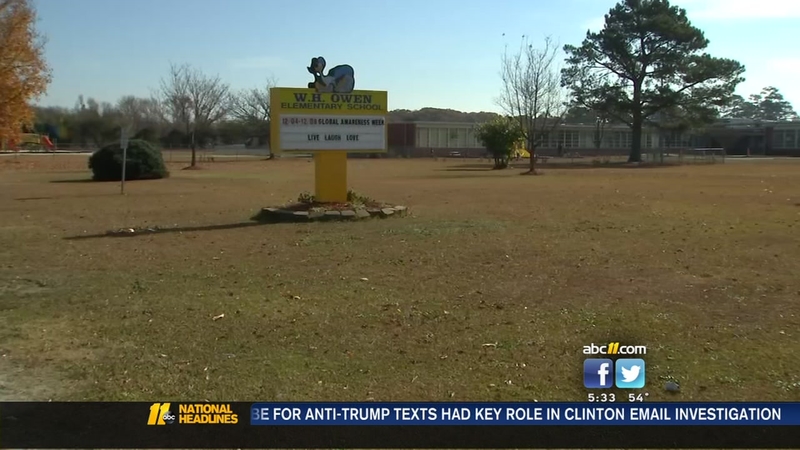 FAYETTEVILLE, North Carolina (WTVD) -- The Cumberland County Sheriff's Office is investigating a report of vandalism at a Fayetteville Elementary School.

During the weekend, a school administrator got a call about the marquee's lettering at W.H. Owen Elementary School being changed to read "Blacks are less" along with a reference to "the N-word."

The administrator was nearby and immediately took the profanities down. Still, someone snapped a photo and it was shared hundreds of times on social media.

"For it to be there for everyone to see, I'm pretty sure all the parents are upset. Because when (my son) gets older, that's where he's going to go, and I don't want him to be around that either," Ashley Thompson said.

Like many parents, Dr. Anthony Wade of the City of Fayetteville was just as troubled.

Wade lived through the civil rights movement and sees Saturday's incident as a sign that things haven't changed much since.

"The challenge with anyone who doesn't believe that we should be in the 21st century is getting them to understand that we celebrate our similarities and value our differences. And there are some people who don't want that to occur," Wade said.

And that's where the newly created Hate Crimes Committee comes in. Wade's team will work with city and county leaders to strategize how to educate the community on hate crimes in hopes of preventing them.

"This is one where we would reach out to the school system to see if we can be of assistance," Wade said.

Meanwhile the Cumberland County Sheriff's Office is investigating. It's hoping surveillance video from nearby businesses show the vandals.