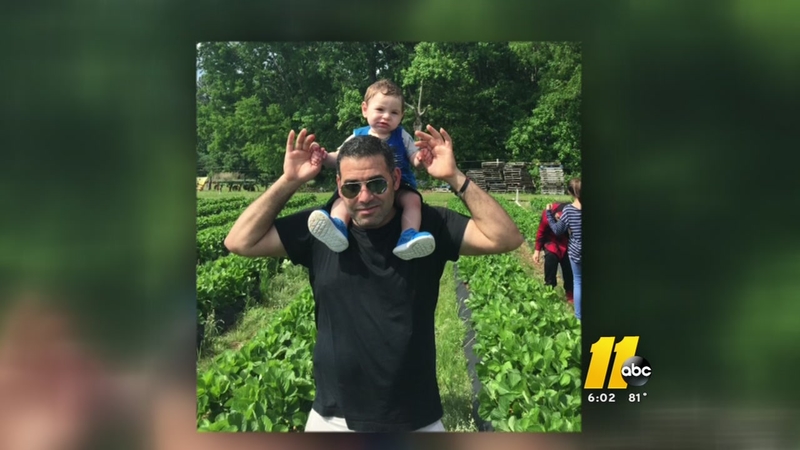 RALEIGH, North Carolina (WTVD) -- The friends of a man taken into ICE custody outside his Raleigh home are fighting to keep his family together, as one of his daughters suffers from a rare medical disorder.

Mosa Hamadeesa is currently being held in an ICE detention facility in Georgia after immigration officials arrested him the morning of June 1.

"It was extremely cruel because they captured him right before his children," said Mohamed Alminifi, a family friend. "They were crying."

Alminifi says Hamadeesa, a Palestinian from the West Bank, came to the U.S. a decade ago on a tourist visa, seeking asylum. His attorney, Allison Chan, tells ABC11 he applied for asylum, was denied, and has since lost his appeals.

Friends fight to keep family together after @ICEgov takes dad who's "never had legal status" into custody outside their Raleigh home #abc11 pic.twitter.com/j61BlJauQC

"What he told me was that when he came to this country, he came because he was about to get killed," said Alminifi.

Bryan Cox, ICE spokesperson, said officers were carrying out a final order of removal issued by a federal immigration judge in August 2013.

"His subsequent appeals were rejected by the courts," said Cox in statement. "Mr. Hamadeesa has received all appropriate legal process before the federal immigration courts and is subject to removal from the United States in accordance with federal law and judicial order.

ICE continues to focus its enforcement resources on individuals who pose a threat to national security, public safety and border security. However, as Secretary Kelly has made clear, ICE will no longer exempt entire classes or categories of removable aliens from potential enforcement. All those in violation of immigration law may be subject to immigration arrest, detention and, if found removable by final order, removal from the United States."

Chan says Hamadeesa has four minor children, three of whom are U.S. citizens. One of his daughters, 9-year-old Nadine, has a rare medical condition that requires ongoing checkups with her physician at Duke Hospital.

Atop mounting legal fees, Hamadeesa, the sole bread winner, has been working as a mechanic to cover expensive medical bills as well.

"Now, I don't know how they're going to manage because he's not there," said Alminifi.

The Duke surgeon who operated on Hamadeesa's daughter, removing a tumor from her leg, is going to bat for the family. Dr. William Eward shared the letter he sent to immigration officials, explaining her rare disorder and the need for her and her primary care giver, her father, to stay together in the U.S.

Chan released a statement to ABC11 that reads in part:

"Mosa is the type of person that the American public needs to support, he is the reason why our country is great. We are a country of immigrants that values diversity and productive members of society. Mosa has no criminal record, he pays taxes to the government each year... Mosa is a loving father and husband, a person with a strong work ethic. Removal at this time does not seem to be imminent, yet they continue to detain him during the pendency of his Motion to Reopen and Motion to Stay removal before the Board of Immigration Appeals."
Report a correction or typo
Related topics:
raleighdeportationiceraleigh newsimmigration
Copyright © 2022 WTVD-TV. All Rights Reserved.
TOP STORIES
LIVE: Snow moving out, windy and cold conditions settling in
New study highlights where you are most likely to catch COVID-19
NC man denied life-saving kidney transplant over vaccination status
Widow delivers heart-wrenching eulogy for NYPD detective
In wake of Pittsburgh bridge collapse, how safe are NC's bridges?
Restaurants, battered by wintry weather, hope business stays brisk
News & Observer: There are 54,000 possible Cook Out combos
Show More
Cooper vetoes bill that would push NC primary to June 7
How many times can I reuse my N95 mask?
10 injured in PA bridge collapse; human chain formed to help
Decades after TV anchor disappears, convicted rapist denies connection
LATEST: Breakthrough cases make up 37% of new COVID infections
More TOP STORIES News