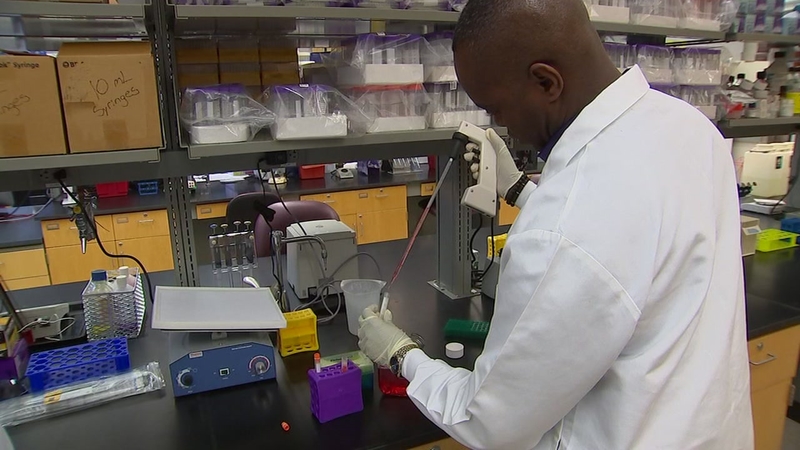 DURHAM, N.C. (WTVD) -- Pancreatic cancer is one of the deadliest forms of cancer. At North Carolina Central University, researchers are making strides to reverse that trend.

Amazing research that's happening in an NCCU lab could be lifesaving.

"Unfortunately, most people, when they get pancreatic cancer they succumb to the disease within six months to a year or two," said Dr. Antonio Baines.

Baines and his team are working to find treatments for pancreatic cancer. Considered nearly untreatable, it's the third deadliest form of cancer.

By 2030, it's expected to be the second deadliest.

"There's really no good drug treatments," Baines said. "A lot of the drugs that are used, eventually the pancreatic cancer becomes resistant to that drug treatment over time."

That's why Baines' research has been paramount in finding ways to fight back against the disease. His team has discovered a particular protein in the pancreas that when manipulated could be the vulnerability that doctors need to target for treatment.

"When we use an inhibitor against this protein, it makes the cells more sensitive to chemotherapy," Baines said.

Baines said they still have a long way to go. But they're not giving up anytime soon.

"I think everybody who studies pancreatic cancer wants to make a difference on some level -- no matter how small or how big it is -- we all want to make a difference," Baines said. "So absolutely, I would love to be part of that group that helps to provide that glimmer of hope and hopefully prolong that five-year survival rate.
Report a correction or typo
Related topics:
health & fitnessdurhampancreatic cancerresearchcancernccu
Copyright © 2022 WTVD-TV. All Rights Reserved.
TOP STORIES
Man charged in Hope Mills double murder
Smith, Raanta, Hurricanes top Rangers for 2-0 series lead
1 person in hospital after shooting overnight in Raleigh
Parents share mixed reactions over plans for boosters for children
Wake Schools bus driver charged with driving bus while impaired
Fayetteville PD on track to full staffing; what about Durham, Raleigh?
Mail delays blamed on dog, owner claims case of mistaken identity
Show More
Body found on the bank of the Tar River in Edgecombe County
'Thrilled to death': Princeton man wins Cash 5 jackpot
Canes fans pile into PNC for Game 2 despite COVID resurgence
Raleigh resident from Buffalo, NY weary one week after massacre
Judge: COVID-19 asylum restrictions must continue on US-Mexico border
More TOP STORIES News