Panthers feel WR Samuel on verge of a breakout season

When Samuel has the ball in his hands, Rivera views him as a "very dynamic, explosive player."

A playmaker. A game-changer. An X-factor.

That's what teammates are saying about Samuel, who continues to amaze early on at training camp with his combination of speed, quickness and explosive plays.

Samuel touched the ball 57 times last season, scoring seven TDs - second on the team to Christian McCaffrey. He averaged 12.7 yards per reception and 10.5 yards per carry. He's the type of player who causes fans to get up out of their seats when the ball is in his hands because he seemingly always has a chance to score.

"Whenever I got the ball in my hands, I made things happen for the team," Samuel said Friday. "I scored touchdowns. That's what I do."

There's little doubt the Panthers will be looking for more ways to get him the ball this season.

With Carolina letting wide receiver Devin Funchess walk in free agency, Samuel is poised to step into a starting role opposite D.J. Moore. And with the opposition expected to pay a good bit of attention to McCaffrey, quarterback Cam Newton, tight end Greg Olsen and Moore, Samuel should have his fair share of 1-on-1 opportunities.

That, said Panthers wide receiver Jarius Wright, could lead to some electrifying plays. Wright likens Samuel to the super-fast kid in a youth flag football game - get him the ball in open space and let people try to catch him if they can.

The Buccaneers couldn't in a game last season. 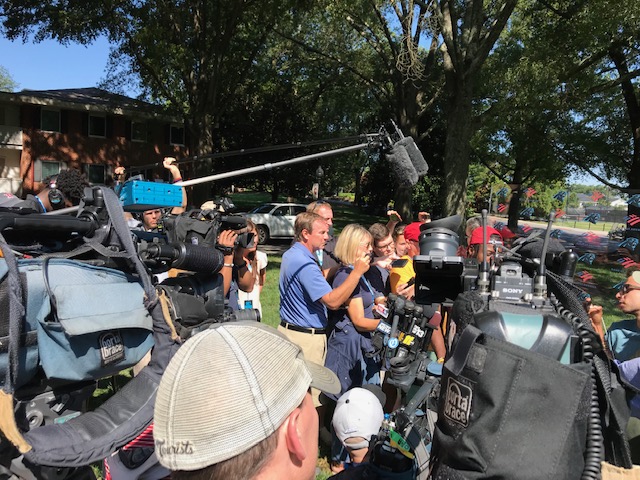 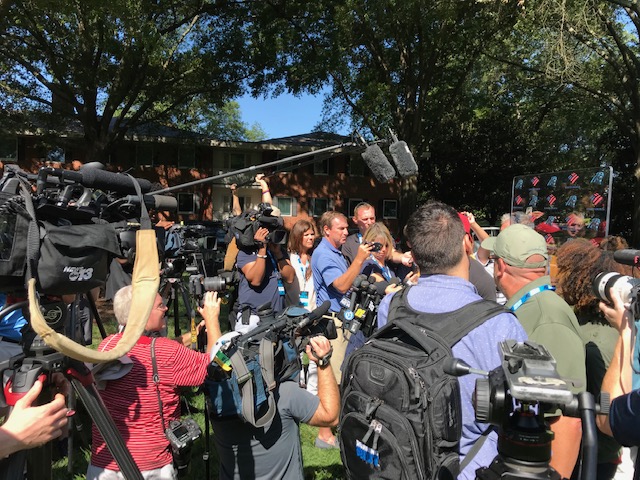 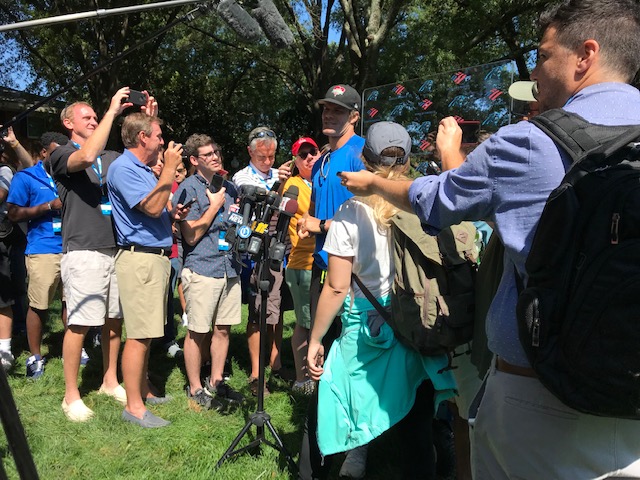 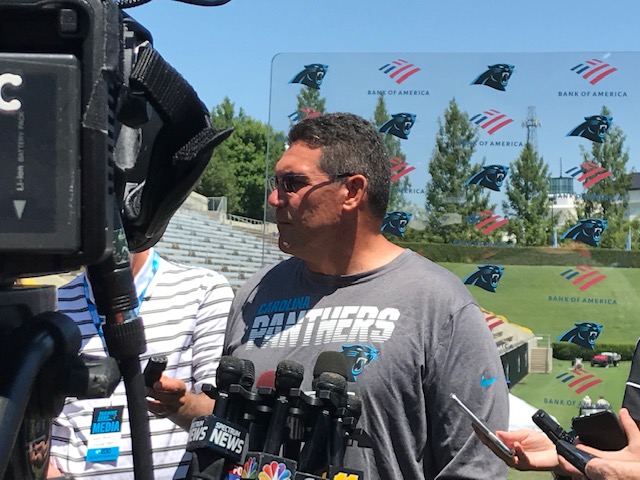 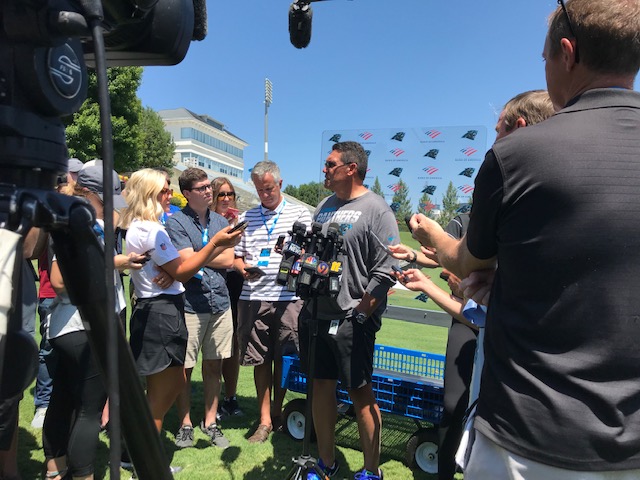 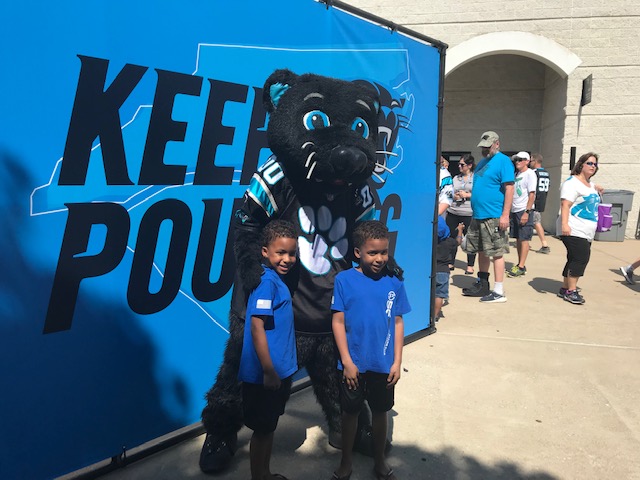 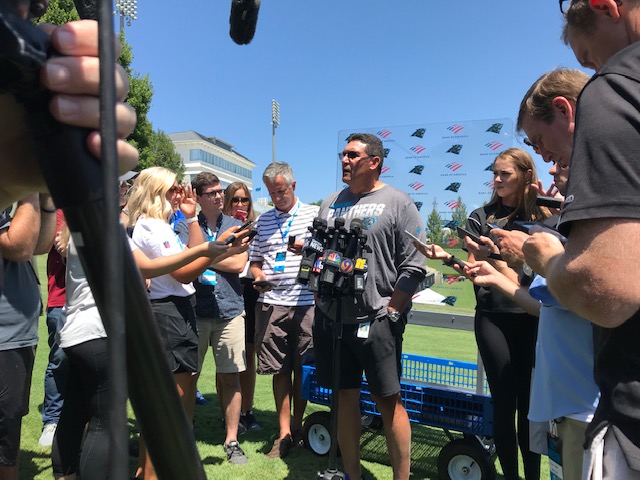 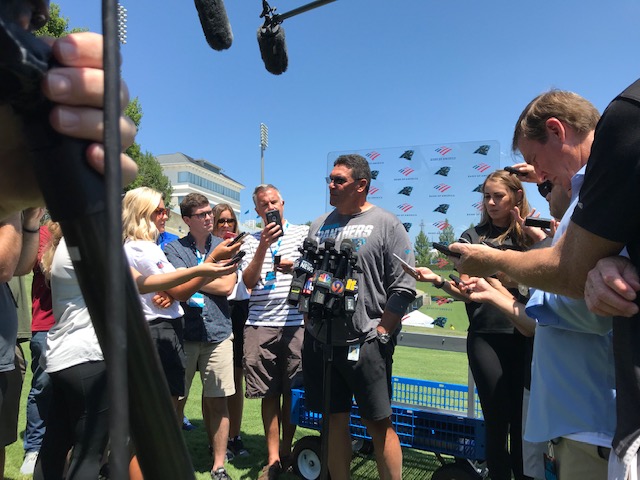 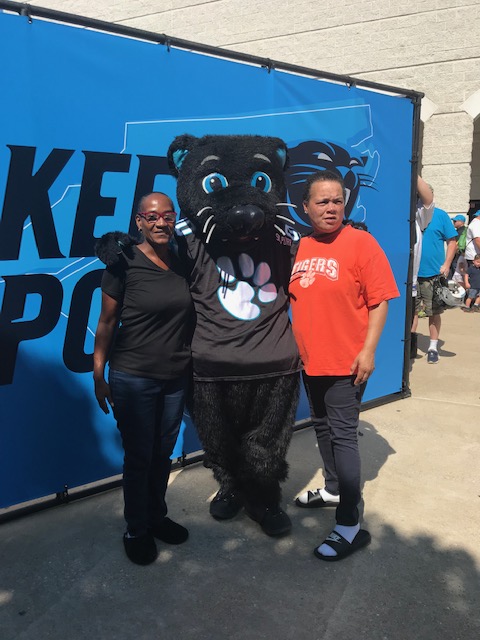 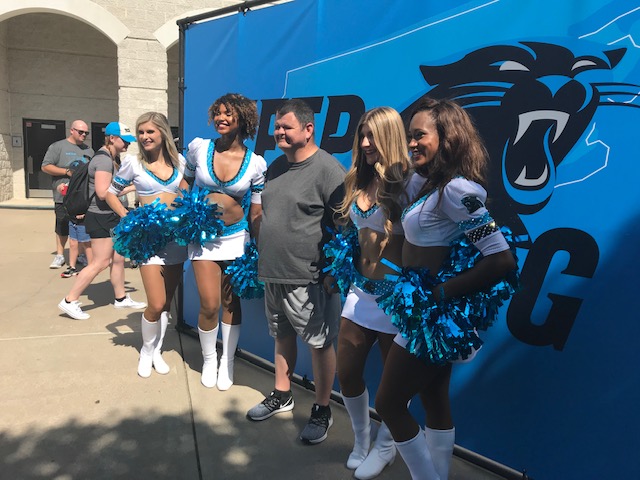 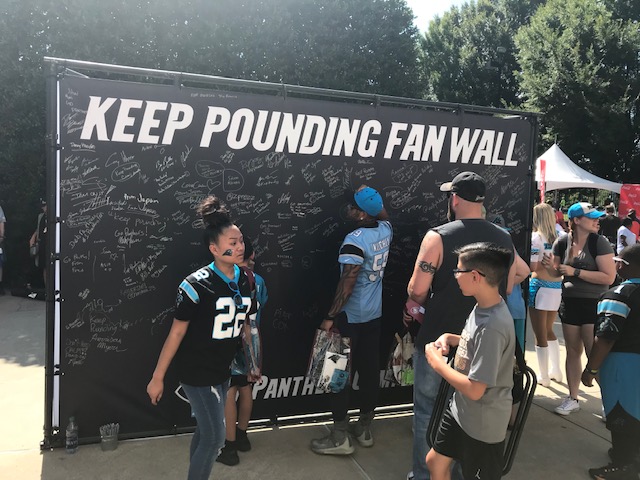 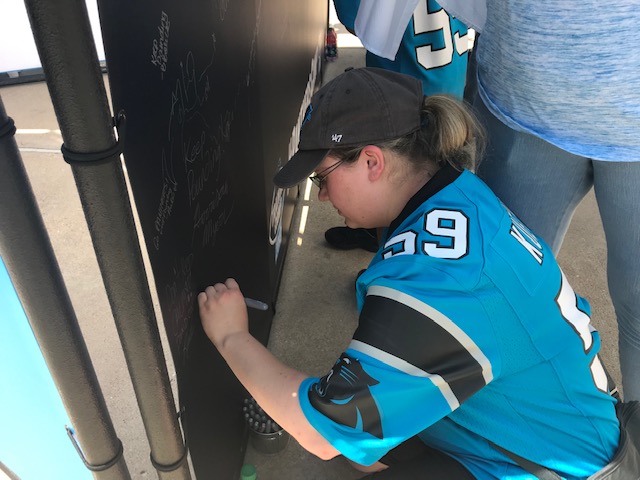 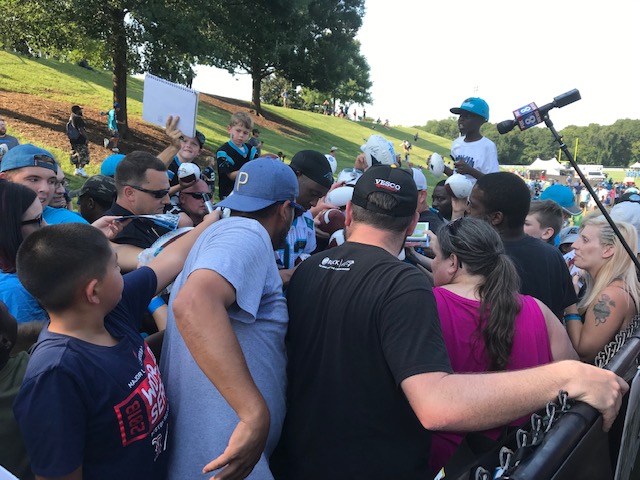 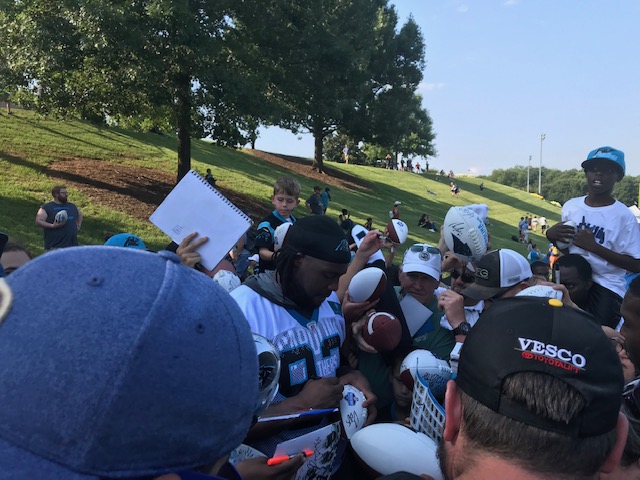 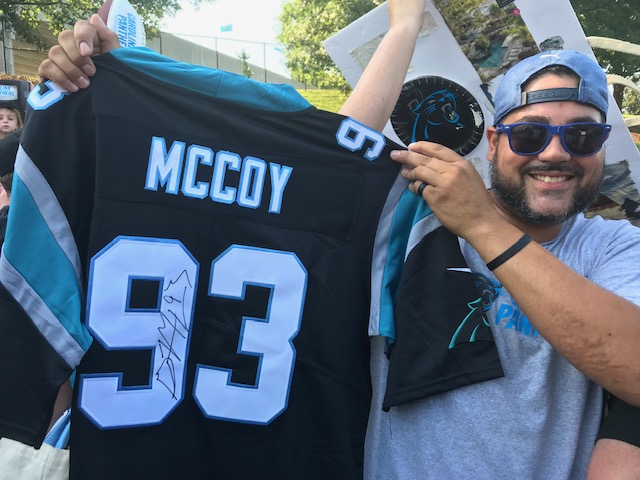 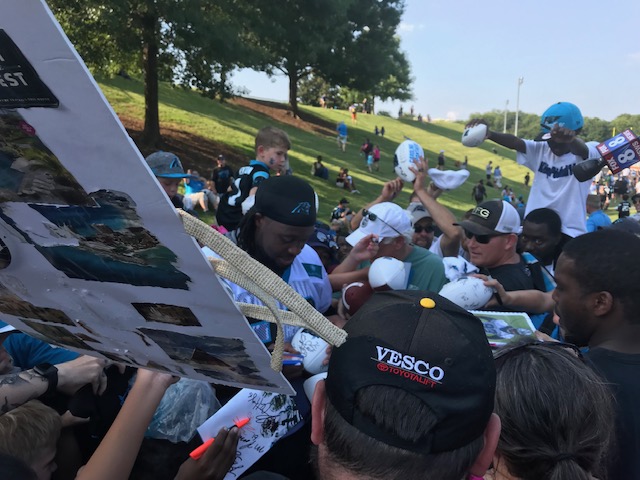 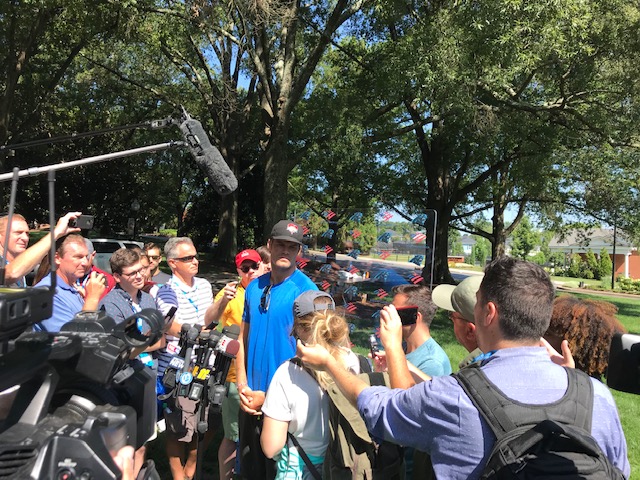 Tampa Bay found out just how difficult it can be to catch Samuel, let alone tackle him, when he changed field on a double reverse and eluded pretty much the entire defense en route to a 33-yard touchdown run .

Samuel doubled as a running back and wide receiver on offense at Ohio State. He gained an ability to run inside and outside of the tackles, something that is paying dividends at the NFL level.

"He's a very quick twitch guy," Wright said. "And on top of being so quick, he can also run really, really fast. So when you add all of those things up I would be willing to bet he's one of the fastest guys in the NFL."

"Watching his route running, how it's improved, you see the growth and the potential. He's just done a terrific job for us," Rivera said.

Samuel is now hoping he can finally put together a full 16-game season.

Hamstring issues and a broken foot limited him to nine games as a rookie. A procedure to fix an irregular heartbeat kept him out of the first three games last season and caused him to have a slow start.

"The main thing with me is just staying healthy," Samuel said. "As long as I'm out there, I feel like I'm going to be able to produce as much as I want to."

This wouldn't be the first time Samuel had a breakout season in year three at a new place.

At Erasmus Hall High in Brooklyn, New York, Samuel got hurt his first season on varsity, steadily improved his second year and took off his third season. A similar scenario occurred at Ohio State, where an early injury sidelined him as a freshman before a quality second season and a head-turning junior campaign that included 15 touchdowns.

The Panthers saw enough to draft him in the second round in 2017.

"I see all of the talk that is going on, I hear it," Samuel said of a potential breakout season. "I feel like I am a great player and my thing is, I have to go out there and show it."