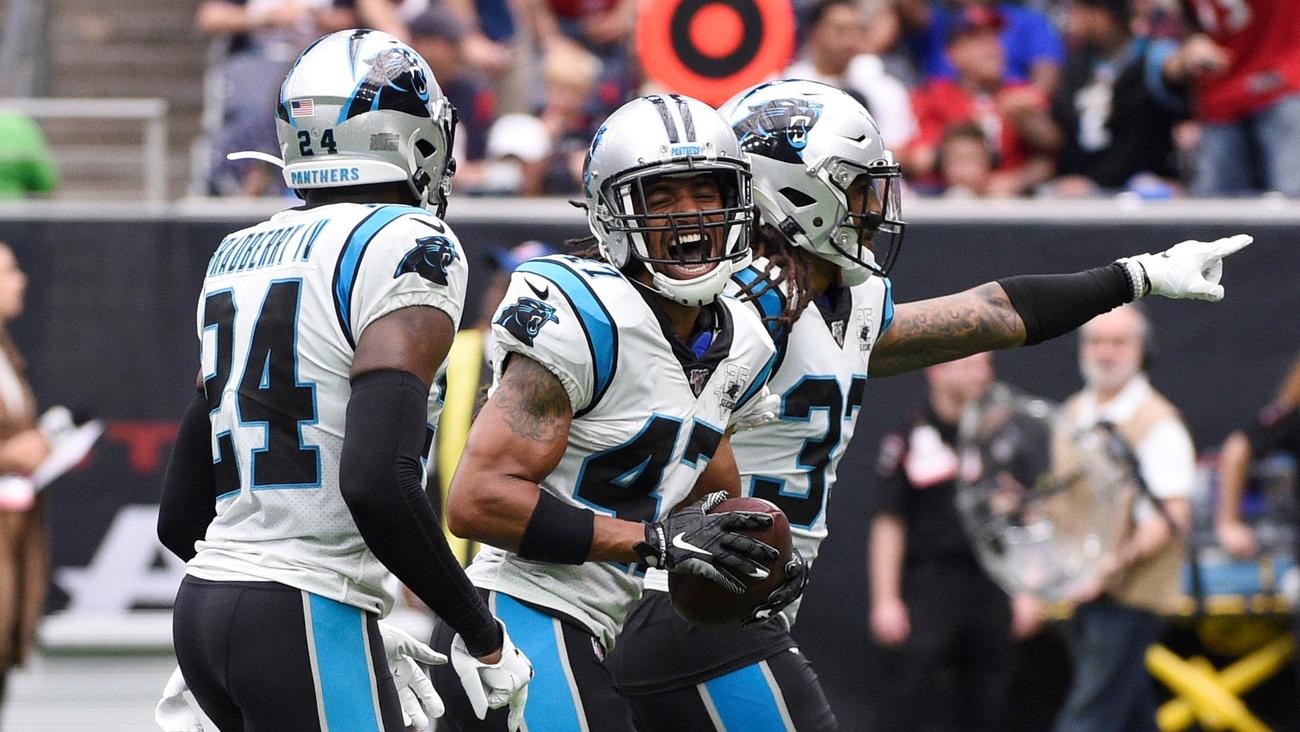 HOUSTON -- Kyle Allen's mistakes could have doomed the Carolina Panthers on Sunday.

Instead, the rest of the team stepped up to make up for those miscues and help the Panthers to a 16-10 win over the Houston Texans.

Allen threw for 232 yards and the team overcame his three fumbles with help from a big defensive play late to get the victory.

"I thought the guys were very resilient," coach Ron Rivera said. "One thing we talked about was having each other's backs because there's been times we didn't do the things we needed to (on defense) and the offense stepped up."

The Panthers (2-2) took a 13-10 lead with a 55-yard field goal early in the fourth quarter. The Texans (2-2) were driving with about four minutes left when Deshaun Watson was sacked by Vernon Butler, who caused a fumble that was recovered by Eric Reid at the Houston 33.

Carolina pushed the lead to 16-10 when Joey Slye added a 26-yard field goal with 28 seconds left. Houston had a chance for the win, but Deshaun Watson's desperation throw as time expired was knocked down in the end zone by Reid.

Allen was making his third career start and second this season in place of Cam Newton, who is out with a foot injury. Allen lost the ball three times on sacks, but the Texans were only able to get points out of the last one to allow the Panthers to keep it close until their defense came through with the big play late.

"You saw a lot of ups and downs and sloppy play, especially by me," Allen said. "Ball security obviously was unacceptable today by me. I put our team in some bad positions, but I think you saw us fight and respond on the defensive side."

Allen had four touchdown passes last week to help the Panthers to their first win against Arizona. On Sunday, he didn't have a touchdown and relied heavily on running back Christian McCaffrey, who had 93 yards rushing and a touchdown and led the team with 86 yards receiving.

McCaffrey was impressed with how Allen responded after his struggles on Sunday.

Watson threw for 160 yards on a day the Texans had trouble sustaining drives even when given a short field after turnovers.

Coach Bill O'Brien was blunt when asked about his team's offensive performance.

"It was terrible," he said. "We've got to do better ... I don't really have any answers. I've got to go back and watch the film. I have to start like right now."

After failing to get any points out of the first two fumbles by Allen, the Texans got to him again early in the third quarter. Houston trailed 10-3 when J.J. Watt swatted the ball out of Allen's hand and pounced on it to give the Texans the ball on the 18-yard line. They tied it when Watson dashed into the end zone for a 1-yard touchdown with about 8 minutes left in quarter.

Brennan Scarlett had a strip sack of Allen on Carolina's first possession and it was recovered by Bernardrick McKinney. But the Texans couldn't do much on the ensuing drive, which included two sacks, and had to punt it away.

The Panthers took a 3-0 lead on a 48-yard field goal with about 2 minutes left in the first quarter.

Houston got its running game going on the next drive with a 25-yard run by Carlos Hyde followed by a 40-yard gain by Duke Johnson on the next play. The drive stalled after that and the Texans settled for a 37-yard field goal to tie it with about eight minutes left in the second quarter.

The Texans forced another fumble by Allen later in the second quarter on a sack by Whitney Mercilus which was recovered by Carlos Watkins. Houston was unable to capitalize on that mistake when DeAndre Hopkins threw an interception on a trick play.

The Panthers took advantage of that mistake five plays later when McCaffrey ran 3 yards for a touchdown to make it 10-3 with about a minute left in the first half.

Houston WR Kenny Stills injured his hamstring on the last play of the first quarter and didn't return. ... Carolina TE Chris Manhertz sustained a concussion early in the second half.

Watson on Houston's inability to take advantage of the turnovers: "It's very frustrating. Any loss is frustrating but especially when we had the opportunities. The defense created turnovers and we didn't capitalize on most of them."

Reid injured his left ankle in the second quarter but returned to make two big plays in the second half. He was wearing a walking boot after the game and said he twisted his ankle.

"Eric Reid is a tremendous young man who plays tough and plays for his team," Rivera said. "It could have been easy not to come back. I know he's going to be really sore the next couple days."